That was quick.
The defense in the Kyle Rittenhouse show trial has rested. I sort of wondered if they would even bother to mount a defense. I would have been tempted to get up and say:
"Your honor, the prosecution has done a better job of exonerating Kyle than any defense team ever could and therefore we rest without calling a single witness"
What follows will be yet another case study in the difference between "Right" and "Left" in America.
If Kyle Rittenhouse, against all reason and jurisprudence, is somehow found guilty, the Right will be steaming mad but as usual we will bottle up that anger and keep plodding forward. What should be done is nothing I can post here but what should happen, won't happen. Even in cases of obvious injustice, we generally just let it go, in no small measure because none of us want to be in a cell next to Kyle. We have too much to lose.
On the other hand, if Kyle is rightly exonerated on the most serious charges (I assume he will get dinged for some minor stuff), the Left has already communicated their intent to burn cities. Individuals have openly stated that a not guilty verdict will lead to violence, and these individuals are getting away with it. Should Kyle walk on most or all of the charges, violence will certainly erupt. The Left knows they can get away with it and most of them are fucking losers who have nothing to lose by spending some time in jail. For many of them it would be the first time they have slept away from home and also the first time they had a shower in many moons.
While our "government" keeps telling people about the imminent threat of Right-wing domestic terrorism, a guilty verdict won't lead to anyone on /ourside/ doing anything violent while a not-guilt verdict will result in the Left exploding.
The rank hypocrisy and outright lying is something that needs to be pointed out to your normie friends. As others have said, if what Kyle did, regardless of why he was there or whether he should have been there, doesn't count as self-defense, then nothing counts as self-defense and that has ominous implications for all of us.
It also is worth pondering. As our zeal and commitment seems to never match that of our enemies, should we really be surprised and upset when they continually seem to be winning?
The verdict should be fairly quick in coming back and then we will see what happens.
Until then some delightful memes.
Rifles > Pistols 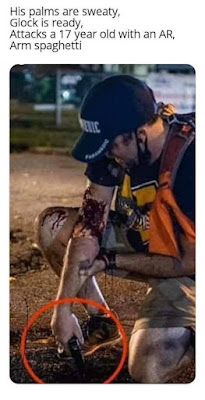 Lots of variations on the "fucked around and found out" theme: 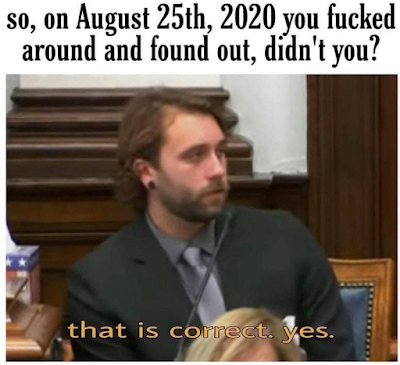 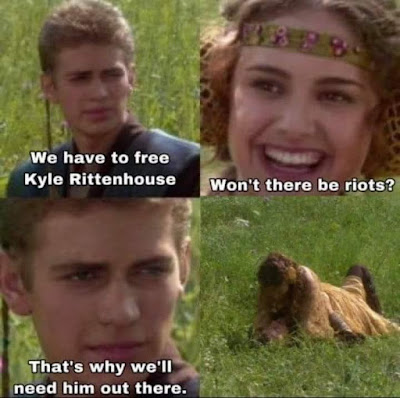