You have to hand it to them, the don’t miss a trick. This is one of those subtle examples of how the media and leftist advocacy groups work in concert.

Each morning I get an email from Google alerts for news stories with the words “mass shooting”. It is an instructive way to see what is going on with these shootings around the country and how invariably they are barely covered nationally. Often I will see as many or more stories about the anniversary of a high profile mass shooting (iow any mass shooting with a White shooter) as I do about mass shootings that happened yesterday. A lot of mass shootings don’t even get mentioned at all.
The other day I received one of these emails and what was interesting was that it didn’t talk much about current mass shootings but instead there were a series of basically the same story having to do with the mass shooting in Indianapolis at a FedEx facility earlier this year where a bunch of people were killed, including some local Sikhs. 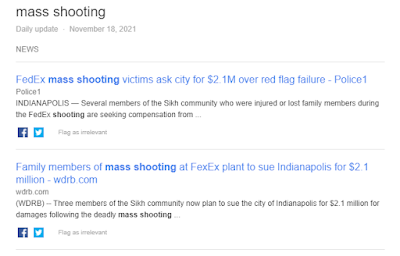 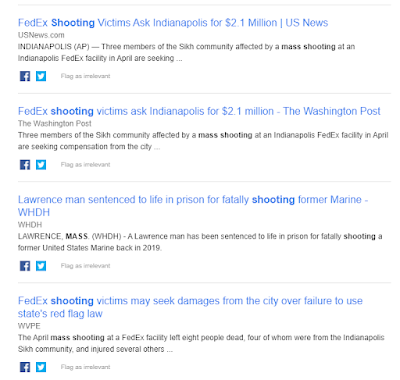 The story ran in national outlets USA Today and the Washington Post, as well as local outlets like WDRB (Louisville), WTHR (Indy) and WVPE (Elkhart, IN). Those are just the outlets I saw in this email. When I did a Google search for “FedEx shooting victims $2.1 million”, it came back with 115,000 results. Here are the first on the list: 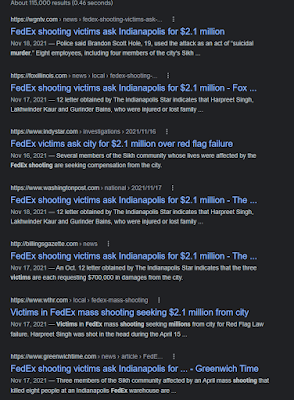 The story ran all over the place, locally here in Indiana, in national outlets and in news outlets like the News Virginian, the Minneapolis Star-Herald, Tucson.com and the Billings Gazette. Why are people in Tucson, AZ and Billings, MT interested in a local lawsuit in Indiana? They almost certainly aren’t but news outlets carried the story all over the country. Why?
Because the mass media, from the big national outlets to local news, are unapologetic mouthpieces for the Leftist agenda. They work hand-in-glove with left wing politicians and advocacy groups and everything they publish is pushing an agenda.
The details of the case aren’t important right now, but notice the theme here. The victims families are suing Indianapolis because the shooter, who was clearly loony tunes, was not given a “red flag” hearing, which might have then prevented him from buying the rifles he used in the shooting. He had previously had a shotgun seized by police and according to Marion county prosecutor had they not been successful in the hearing, the shotgun would have been returned to the guy who ended up shooting up his former workplace.
The news stories being blasted to every outlet in the country have a very specific purpose. The audience is not the average reader or viewer who doesn’t give a shit about the lawsuit, and why would they. No, the audience are the local politicians who see a city being sued for $2.1 million and are thinking “crap, we can’t afford that”. I suspect that in many city halls around the country in states with “red flag” laws, a meeting was scheduled shortly after the stories ran with police and prosecutors and the message was clear: use the red flag law more frequently, better to use it when it isn’t necessary than to not use it and get sued.
If someone has their firearms taken unjustly, that individual will have to fight a costly legal battle to get them back but if someone doesn’t have their firearms seized and ends up shooting someone, the local government is on notice that they will get sued. It is just a matter of basic math.
Want to bet that at least one anti-2A group is helping to bankroll the lawsuit against Indianapolis?
The fight to disarm Americans is not just being waged via outright bans and confiscation in Congress. It is happening every day in little actions like this one that add up over time. I have made this comparison before to the anti-abortion movement. While Roe v Wade/Casey v Planned Parenthood is still the law, anti-abortion activists have succeeded in driving a lot of clinics out of business and made abortion very rare in many states by small, incremental actions that add up over time.
The anti-gun lobby is doing the same thing. Even if they are not having much success at the national level, they are endlessly pushing in small ways to restrict your rights. It is very telling that a state like Indiana, a deep red state with very pro-2A laws in general, still has a red flag law on the books.
Don’t get sleepy on the question of the 2nd Amendment. Just because nothing big is happening on the national stage doesn’t mean they are giving up. Every day there are people who have as their sole purpose in life to disarm you. Our vigilance must match their obsession or we will wake up one day like Australia.