Thanks to our world where everyone has a video recording device, scenes like this one are all too commonly captured and shared for the world to see:

Shocking video shows a group of female youths, one in a hijab, brutally beating two passive Asian people on a SEPTA train in Philadelphia on Wednesday near Erie Station. pic.twitter.com/DClUZXZBHv

All of these videos are then accompanied by some sort of exclamation of shock, as if it is somehow new or unusual. What is "shocking" about seeing African teens acting like....African teens? What would truly be shocking is if these "teens" quietly got on the train, patiently waited until their stop, perhaps conversing with one another in a reasonable tone of voice and volume, and then got off the train. You know, like normal people.
Recall also the yammering last year about anti-Asian hate crimes and how many Asian "leaders" blamed these hate crimes on "White supremacy" even though virtually all of the attacks were black on Asian. It isn't White supremacy that made these teens assault the Asian students, it is simply that the Asians are weak and small and that attracts violence from "teens" like flies to manure.
This happens so often, and almost entirely featuring Africans as the assailants, that it is as far from "shocking" as one can imagine. Andy Ngo, one of America's only real journalists today, knows this all too well. The casual violence is rampant but the excuses are always immediate like this incident where former NFL player Zac Stacy beats the hell out of his White baby mama.
That is classic stuff. No warning at all, just pops her in the face. Throws her across the room and smashes a TV. Then this: 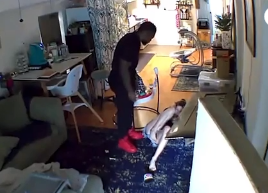 As the small woman cowers on the floor, he glowers and postures over her to show what a fucking badass he is. They love to do that, the display of aggression over a weak or passive person. It is primitive, even animalistic. That is why you see so many videos where a person is knocked out cold and some uninvolved person comes in to kick them or steal from them. They think it is a sign of dominance, signaling to each other some primitive status.
You can tell from the way she is talking that this is far from the first time he has hit her. According to the NY Post she claims he has been progressively more abusive and violent.
In a restraining order, Evans claims Stacy had been abusing her since she became pregnant with his child last year, with the terrifying attacks escalating.
Police said they previously responded to two other domestic incidents involving the couple.
The first incident on Aug. 16 was a “verbal altercation” and Evans told police “no violence occurred.” Police were again called on Sept. 26 to an incident where Stacy allegedly hit Evans in the face with a handful of mail and then fled before police arrived. Evans declined to press charges, but Oakland PD filed a domestic violence battery charge with the state Attorney General anyway, cops said.
No impulse control, no ability to deal with anger other than with violence. On Twitter I saw a bunch of people trying to explain this away with talk about CTE but for some reason the concussions only seem to result in these rage filled attacks in a certain segment of the NFL.
At some point do White women figure out that the odds of this happening to them are increased by a ton when they shack up with one of the fellas? I guess if he is in the NFL and making decent money it might be a decent risk-reward ratio but for average White women getting knocked up by Africans? At best you are going to raise your kid alone but the potential downside is an ass beating or getting killed. There has to be a better way to get back at your dad because he didn't love you enough.
There is nothing "shocking" about this behavior because it happens all the time, often on film. It can happen anywhere and is completely without provocation. Your best policy is to stay away from them when possible and be on your alert if you have to be near them, and never, ever look meek or vulnerable because that just encourages them.
Posted by Arthur Sido at 10:09 AM