Oh We Are Back To This Again?

From my local news, this recycled AP "news story":
U.S. faces ‘heightened threat’ amid holiday season and mass religious gatherings, DHS says
And where is this "threat" coming from? You guessed it....
This is the fourth time this year the agency has issued a bulletin, highlighting the perceived danger from a volatile mix of domestic extremists, often motivated by racially or ethnically motivated hate, and homegrown extremists inspired by overseas groups. It reflects a shift from the focus on al-Qaida and other organizations following the creation of DHS after the attacks of Sept. 11, 2001.
Four times this year with zero actual attacks.

According to the article a whopping 70 people have allegedly been killed in "domestic terror" attacks:
From 2010 through 2020, racially or ethnically motivated violent extremists advocating for the superiority of the white race have committed 18 lethal attacks in the United States, killing 70 people in attacks that typically focused on houses of worship, including in Charleston and Pittsburgh, according to the FBI.
So over the course of those 11 years, 70 people were killed by racially motivated (iow White) killers. That is about 6.36 per year. 13% of those killed were in one incident, Dylan Roof, and 11 were killed at the Tree of Life synagogue in Pittsburgh, or 15% of the total. In other words, of these 70 killed by "domestic extremists" over the last 11 years, more than a quarter were killed in two incidents.
Meanwhile more than ten times as many people have been murdered in Chicago just so far this year in a single city. 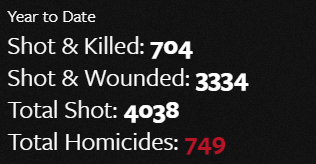 And there have been over 615 mass shootings so far in 2021 according to the Gun Violence Archive.
Well it clearly seems based on that evidence that the approximately 6 people killed annually on average by White "domestic extremists" are a far greater concern than the thousands of people murdered in the U.S. every year by black and mestizo shooters.
Homeland Security indeed.
Posted by Arthur Sido at 4:21 PM