Just When You Think He Gets It

In the universe of political pundits, one name is consistently mentioned as being close to echoing /ourguys/ and that is Tucker Carlson. I watch most of his clips when they come out and almost always he is largely on target. Notice I said "almost always". Every once in a while he says something like this....
Yes Tucker, a couple of off-cycle elections in the first year of a wildly unpopular "President" somehow overrides decades of evidence that non-Whites, especially blacks and mestizos, vote overwhelmingly for Leftist politics. That has always been so and will continue to be so, especially since conservatives like to pretend it isn't true. For more see: The Single Issue Focus Of The Gun Rights Lobby: Both Their Greatest Strength And A Fatal Flaw
The exit polls in Virginia tell the tale. I am using the exit polls from the Washington Post.
Glenn Youngkin won not by appealing to non-White voters but by speaking to the concerns of actual Republican voters on issues that matter, and the issues that mattered were not tax policy but cultural issues and specifically the anti-White racial teaching known as "Critical Race Theory".
Youngkin won the White vote with 62%: 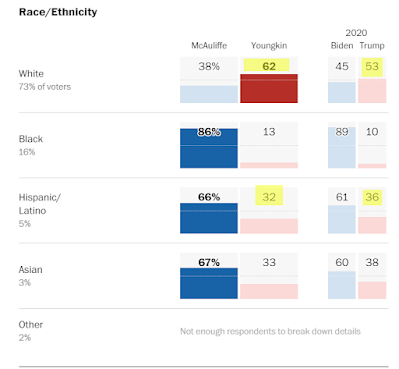 That is an improvement over Trump of 9% points. Meanwhile his percentage among mestizos was 32%, a drop of 4% from racist Orange villain Trump. So much for that new and improved post-Trump GOP.
But Virginia has more to tell us. 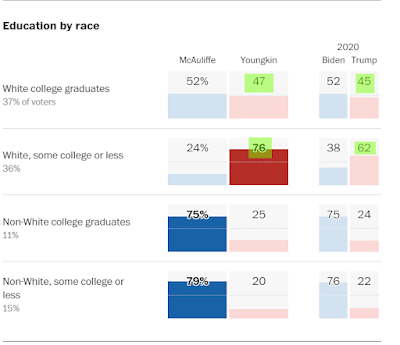 Northern Virginia is full of pretentious, over "educated" White court mandarins who work in Coruscant and they voted for McAuliffe, with Youngkin losing 2% in White college graduates over Trump. On the other hand Youngkin did great among "some college or less" Whites, winning over 3/4 of those voters who made up more than a third of the electorate. That was a 14% improvement over Drumpf. Digging a little deeper shows something very interesting.... 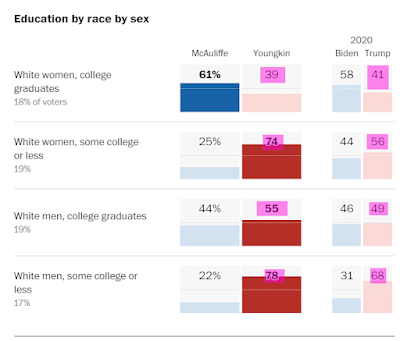 Where Youngkin did the best over Orange Man was among White women with "some college or less". His gap over Trump was 18%. An 18% increase is enormous. While Youngkin did worse with White women who graduated from college, with McAullife winning that group by 61% (yet another reason to shut down the university system), Youngkin also did better with all White males, winning both college educated White men and White men without a degree. But I still can't get over that 18% improvement with White women without college degrees.
What accounts for that?
Again, the issue that really seemed to drive the race were cultural and economic. Jobs is kind of generic as is the economy. With inflation out of control, average people are starting to feel the pinch. But education was the top issue for a quarter of respondents and that was driven by two things, first the girl raped in a public school bathroom by a boy wearing a skirt (and I can't believe we are in a place where that is a real thing) and also CRT being taught in schools. Do you think that White women are concerned about their daughters being raped in schools and also learning about how evil they are?
A couple of other cultural issues were interesting. 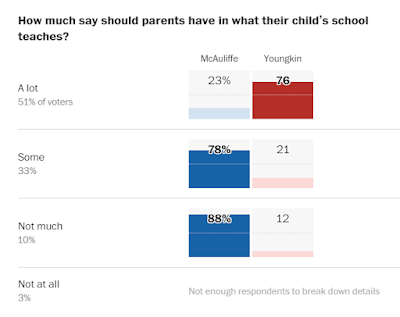 Schools. Southern heritage. Inflation. These are deeply cultural issues and the racial divide shows the winning strategy for the GOP in the remaining fake and gay elections we pretend to have. Of course that is not what they took from the results. This is perhaps the best take on a moronic tweet from the House Republicans.

The GOP exists to manage you, not to represent you, and certainly not to win and govern on your behalf

Exactly.
The one and only electoral strategy that consistently wins for Republicans is to appeal to their White, mostly working & middle class, voting base. All this bullshit that is spewed about "skin color" and "how you look" being irrelevant is stupid and it is false. Tucker knows better but he says it anyway. That clip sounds like one of those times when he was told what to say by the higher ups because it runs counter to all of the evidence and common sense available to him.
Just another reminder, don't place your faith in famous people. In fact don't place much faith in people at all. Learn the secret of steel, it will serve you better. 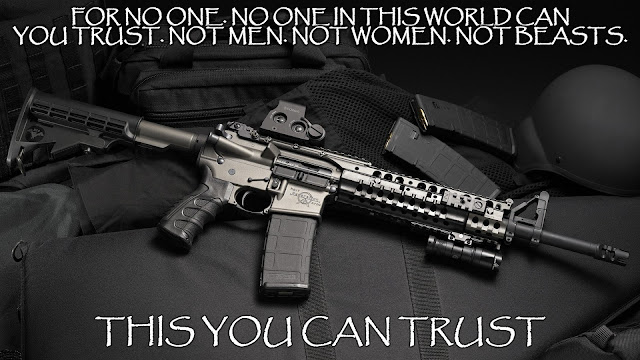