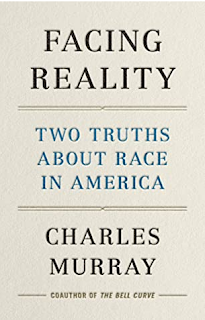 Charles Murray is one of the most hated social scientists anywhere on the right, and the reason he is hated is not just what he says but the gentle and disarming way he says it. He isn't screaming on camera about the niggers and the wetbacks, he just calmly and rationally explains his methods and his findings. He is kind of the libertarian version of Jared Taylor, someone else who says naughty things in a disarming way that upsets the woke.
Murray is most famous for his book The Bell Curve that examined the forbidden topic of group racial difference in IQ. TBC is a bit weighty for the average reader, you can get bogged down in the methodology very easily but Murray's more recent book, Facing Reality: Two Truths about Race in America, is far more accessible. The two truths Murray focuses on are as follows:
"The first is that American Whites, Blacks, Latinos, and Asians, as groups, have different means and distributions of cognitive ability. The second is that American Whites, Blacks, Latinos, and Asians, as groups, have different rates of violent crime."
No one will be surprised by those two truths, although some will publicly deny they exist despite the overwhelming statistical and anecdotal data to back them up, compiled over decades of research (back when that sort of research was permitted).
I didn't find anything new in Facing Reality but I didn't expect to. The ground that Murray walks is familiar territory for many of us. His data is very useful and the book itself would be likewise a great tool to introduce normie friends to the idea of race realism. Unfortunately due to conditioning few of the people who need to read it are likely to do so. Murray scares the bejeezus out of the Left and is demonized by people in reviews of his books that clearly have not read any of his stuff in an effort to frighten normies away from considering his research.
Narrowly focusing his book on the two topics makes it very accessible to people who are not statistics nerds. The bitter pill we are all going to be forced to swallow is that demographic changes are transforming America into something unrecognizable even 20-30 years ago and none of those changes are for the better. The America we are headed into in the next 10-15 years is going to be populated by people who haven't shown any ability or inclination to create or sustain a free and prosperous society.
When America was 85% White we could try to ignore these racial differences but as America becomes majority-minority, the harsh reality of a population where more than half of the citizens are both significantly less intelligent and correspondingly more prone to violence will not be something we can ignore.
The most baffling and frustrating thing about Facing Reality is Murray's insistence on waffling about the implications of his findings. He shows over and over that different racial groups have different intellectual capabilities and behavior but then tries to emphasize the individual exceptions. This is not a nation of 330 million disconnected individuals, it is a nation made up of a few racial subgroups all competing against one another. It is the sort of libertarian cognitive dissonance that drove so many of us out of that group and into the dissident right. It also makes Murray far less effective as a voice than he could be.
Regardless, Facing Reality is a decent and quick read, and might be worth recommending to normiecon friends who still like to pretend that "conservatism" can be color blind.
Posted by Arthur Sido at 10:01 AM