Your Two-Part Mission For Right Now

By now most of us, a small but sturdy band of chaps and chappettes, get that we are in the end stages. The pieces are still in motion but the intermediate future is kind of set. The combination of economic calamity barely held back, social strife, increasing lawlessness, lack of public trust, violent rhetoric and hatred of one another on either side of the political divide and an absolute lack of any leadership is pointing toward something happening in the near future. Maybe it will be localized chaos or widespread chaos, civil war or a gradual practical dissolution. Whatever it looks like, those who see it coming are preparing for it and lots of people on /ourside/ are offering their advice.
If I was creating a checklist for someone when it comes to being prepared for what is looming on the very near horizon, it would have things like getting in shape, hardening your heart and mind, gearing up with firearms and ammo, making sure you have a plan for when the lights go out and the food supply dries up. Those are all things I have talked about as have many others. But my top two wouldn't be any of those things.
The top two imperatives right now are what I have been saying for a long time.
One and most important, get out of population centers. That especially means cities but it also means densely populated suburbs. In the suburbs we have lived in it has been generally true that you don't know your neighbors that well and they don't know you. But even a relative stranger can probably figure out the prepper guy and if shit hits the fan, unscrupulous and unprepared people are going to seek out the people who did prepare. You might not be defending yourself against hordes of feral urbanites but you might get a bullet in the back from your friendly neighbor who keeps his lawn so tidy.
Even more so, most suburbs are in easy commuting distance from the cities. That is kind of the point. The suburbs are going to be target rich environments for looters and urbanites seeking violence and mayhem. For example, one of the wealthiest suburbs in America is the D.C. suburb of  Alexandria, Virginia, specifically "Old Town", where many of the court mandarins of the American Coruscant reside. 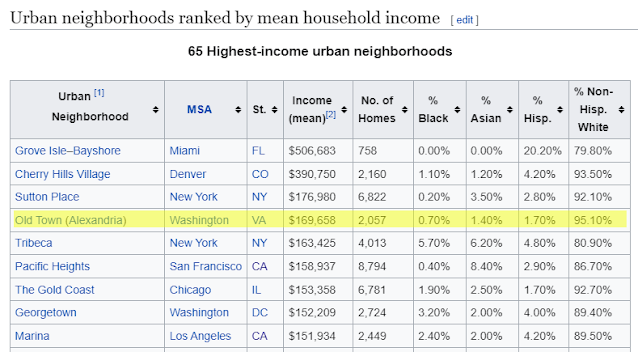 95% White with a high six figure mean income you say? Well that sounds pretty safe. Not so fast. Alexandria as a whole is around 60% White and over 21% black. I have a sibling who has lived in that area for a number of years and we have visited a few times, although not lately. I remember one place she lived, a very nice corner house at the intersection of two streets full of trees and expensive homes that were almost entirely owned by Whites. I also remember her buying a nice set of patio furniture for her front porch that was stolen almost immediately and also one day when a couple of nice young African boys, the oldest maybe 12 or 13 walked down her street. Someone a few houses away was having a party later and had a balloon tied to their mailbox so the older African boy pulled out a knife and popped the balloon. He saw that I was looking at him and shouted something at me to the effect of "Say something mother fucker". Very charming.
Alexandria is so very expensive because it is so very convenient to D.C. 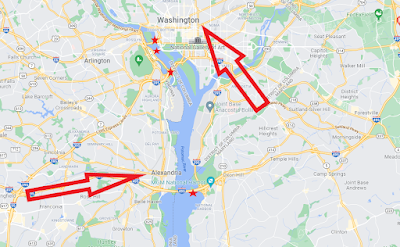 Right across the Potomac with multiple bridges connecting Alexandria to D.C. as well as the Metro lines. That is great for work but what if things go sideways? The bridges go both ways and despite "gentrification", a fancy word for White people moving into once black neighborhoods and making them less shitty places to live, D.C. is still more than 50% black. Many of the Maryland suburbs across the river are overwhelmingly black, like Hillcrest Heights (93%) and Temple Hills (85%) and those areas are an easy drive or even walking distance to Old Town. When the dollar stores and liquor markets are empty, they are going to start thinking about doing some luxury shopping.
Just moving out of the city isn't quite enough although it is a good start, you need to get as far as away as possible.
That brings me to the other point: getting free of the globohomo economic system that creates a prison with bars made of health insurance, steady paychecks and 401k plans.
The two most common objections to bugging out right now, like today are both challenging. One is family obligations, an elderly parent to care for or children in school. I get that and it is a tough call. You have an obligation to family of course, the best you can do in those circumstances is have the best plan you can to extricate yourself and the person/persons you are caring for. That can obviously have lots of challenges, it is tough enough to get an able bodied individual clear of a disaster but if you have either young children or elderly parents, or someone who is otherwise incapacitated, then it makes it a lot harder especially if they don't live with you. I guess the thing that would be most critical would be to have their buy-in if things go bad, an agreement that if you say "time to go" that they go. No questions, no arguments.
The other is job related. What we do for a living is a very important part of our identity. One of the most common small talk openers is "So what do you do?". It creates an opening for conversation, and it helps establish any common ground. It also creates a power dynamic. If you ask someone you don't know "So what do you do?" and they say "I am a surgeon", for most people that puts you at a power deficit but if they say "I am a middle school custodian", then most people see a power advantage. If you never have done so, try going to a Wal-Mart in a business suit and tie and see how deferential people are to you. People respect people with prestigious jobs.
Anyway, changing jobs is pretty common as is moving for a better position but usually that involves moving from one blast zone next to an urban area to a different one. Maybe slightly better but still a red zone for danger. What I am talking about when I say bug out right now is moving somewhere outside of the obvious looting and pillaging zones. I see the chaos scenario starting out with lots of bad things happening to suburbanites who will be helpless. At first. At some point the men are going to stop worrying about getting into trouble and start shooting anyone they don't recognize on sight. I am counting on those suburban types to serve a useful purpose at last.
25 years ago moving to the middle of nowhere would be career suicide unless you could come up with some very specific niche business but now many jobs can be done from just about anywhere. We have lived way out in the country for over 10 years and have had high speed internet for most of that time, with it becoming faster and way more reliable the last 5 years. You can do many professional jobs from the country and if not, you can learn a skill that is in demand pretty quickly.
It can be jarring. When we moved here I was working for a big financial services firm with a great salary dropped by direct deposit into my account every two weeks, great insurance and retirement plans. I couldn't imagine that ten years later I would be making a living by a couple of small businesses, making less per month but living much better than before. I did it, you can do it. I found something I was good at and better than anyone else doing the same thing around here and turned it into a pretty lucrative business that I can do locally and that provides the flexibility that I need.
You can do it too and if you believe what you say you believe, you have to because this ship isn't going to right itself.
We have been in a war that most of us didn't realize for my entire life and now we are at the end stages. It is game over. We lost. Our mission now is to avoid the rampaging victors and regroup to fight another day.
This post is not intended for those who have already taken these two steps but for those who are on the fence about it. At this point there are very few people who haven't either figured it out or are stubbornly refusing to see what is before their eyes. To me, there are simply a lot of people you can't save. I saw this on Faceberg the other day and it rings true. 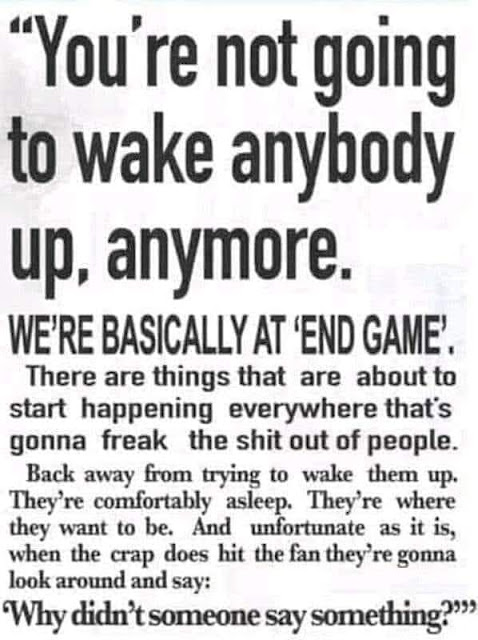 Many of those people who still cling to their retirement plan and their sportsball aren't going to make it but that doesn't mean they aren't useful. They are. They will be meat-shields for the rest of us. They are going to be the easy prey for the feral urbanites and the wannabe Bolsheviks and with luck they will wipe each other out before they become a problem for us.
That sounds cruel and callous but we aren't in a world of rainbows and unicorns anymore. I will keep sounding the alarm but with little expectation of seeing anyone waking up. When it comes down to it, better them or really anyone else, rather than me and mine.
We can't save everyone. We can't save most of them. We can only avoid getting dragged down with them.
You have been given a precious gift of time. How you use that time right now will determine how long you last in the dark days to come.
Posted by Arthur Sido at 12:06 PM