What Kind Of Privilege Is This?

Yesterday an African male named Timothy George Simpkins shot three people at an Arlington, Texas high school.
Today?
Suspected Texas high school shooter released from jail
Yep, the little bitch just strolled out of prison after a whopping $75,000 bond and is home with his mama. He shot three people. At a school. And he walked. With a $75,000 bond.
Poor fella is claiming he was being bullied and that makes it OK to shoot the kid he was fighting, plus another kid and a teacher trying to intervene. If he had been a White school shooter, you can be damn sure no one would be making excuses for him and he sure as shit wouldn't be free today.
According to reports, the fight was broken up and then he pulled the gun he brought to school and exhibited some of that world famous African marksmanship.
Footage on social media allegedly showed Simpkins getting into an altercation during class with another student that escalated to gunfire Wednesday.
The fight was broken up and the two students calmed down, but then Simpkins pulled out a firearm from his orange backpack and fired several shots that struck three people, according to an arrest warrant Thursday.
Mark Dice made a solid point.... 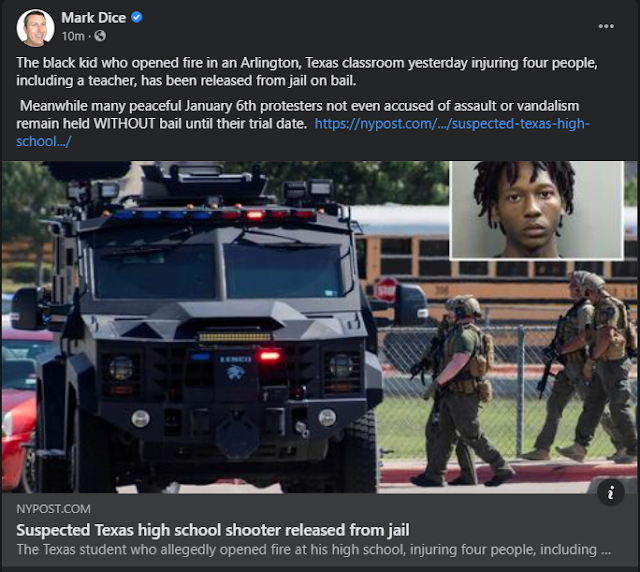 White political prisoners have no rights, black kids shooting up a school get to walk in less than 24 hours.
Meanwhile a different group of Africans got into a fight, shooting ensued as it always does, but no felony charges were filed. Then two Africans got into a fight, one with a knife and one of the Africans was gutted like a trout and died but also no murder charges were filed. Why? Because the Africans were engaged in "mutual combat".
Illinois family outraged at no murder charge in teen’s death due to ‘mutual combat’
Prosecutors reject charges for 5 suspects involved in deadly Chicago shootout, cite mutual combat: Report
Places with Africans are turning into something far worse than the Wild West, where at least the marshal and sheriff could enforce some form of law. Now, if an African is committing a crime, decent people just need to get out of the way and hope they don't get caught in the crossfire.
Posted by Arthur Sido at 5:46 PM