It just never stops...
Black hobbits, female heroes and other races in Amazon’s new ‘Lord of the Rings’ series draw mixed reactions
Expect some trannies or at least some faggy elves or plus Strong Diverse Female Warriors that slaughter males twice their size. What exactly does one call a black Hobbit? I think I settled on Noggit. Better start locking the doors in Hobbiton, things are about to get freaky. 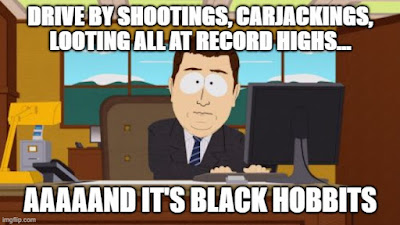 There isn't necessarily anything that would preclude there being Noggits in Middle Earth. Sure it was written from a Eurocentric point of view, with the "South" being full of exotic and often dangerous people like the Haradrim who ride "Oliphaunts" and sound very much like Indian or Arab people as Tolkien would have known them. And the Shire itself is clearly an idealized version of the rural English countryside. I can't imagine Tolkien envisioning Hobbits as anything but short Europeans, the idea of having them be black for purposes of "representation" would have been baffling to him. It simply is unnecessary, obvious and juvenile.
An unpopular opinion I hold is that Tolkien was a much better world builder than story teller. The world he created that you only see small pieces of in the LOTR movies and books is part of an enormous world. The guy created freaking languages for crying out loud. His world is so complex that even as someone who has read his main books repeatedly, I still only have scratched the surface.
Now imagine a team of the best African writers you could assemble. Give them all the resources they need to create full time and give them a decade to do it. Would they be able to build a world like Middle Earth?
Come on.
Just clumsy imitation and no one who is a fan of Tolkien's work will watch, leaving us with yet another visually appealing spectacle that lacks even a smidgen of substance.
Posted by Arthur Sido at 2:06 PM