The Many Snores Of Newark

Well that was basically just awful.
I am in the camp that holds The Sopranos up as one of the best TV dramas of all time. People saying The Wire was better are simply wrong and likely are bad people. I watched The Wire all the way through and it was good but I don't really have a burning desire to watch it more than once. The Sopranos? I have watched multiple times all the way through and wouldn't mind watching it again. So like I am sure a lot of people I was cautiously interested in the new prequel movie The Many Saints Of Newark which features Michael Gandolfini, the son of James Gandolfini who famously played Tony Soprano. Michael plays his father as a teen in a movie that looks at the relationship between Tony and Dickie Moltisanti, the father of Tony's nephew Christopher who plays a major role in the series.
It just was released and we watched it this evening. 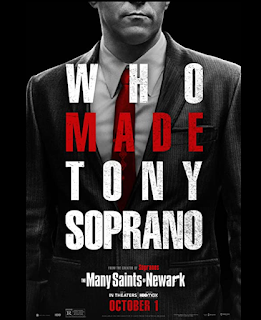 The Sopranos ended in 2007 so it has been a good long time, long enough for Michael Gandolfini to get old enough to play a young Tony Soprano. He obviously looks a lot like his dad so it works.
But the movie itself? A giant meh. Some spoilers ahead.
The cast was trying too hard to act like the actors from the series. They weren't playing a part, they were mimicking the actors who originally played the role. They were mostly all radically overplaying their parts, looking more like exaggerated caricatures of the people they were playing. You could tell they watched the show and then practiced looking like Sil or Paulie or Livia Soprano in the mirror. Some of the casting was OK but others were terrible. Jon Bernthal as Johnny Soprano looks nothing like Tony's dad from the original series. Pussy Bonpensiero is played by Samson Moeakiola, and while he is half Italian, he is also half Polynesian and looks more like that side of the family. Plus he basically never speaks. Ray Liotta plays the father of Dickie Moltisanti and then plays the uncle of Dickie which was confusing as hell.
Of course this being 2021 we have the underlying theme of the how oppressed black people are with a street hood who becomes a major player in Newark. He of course seduces the girlfriend of Dickie Moltisanti, something that of course would happen in those days. Lots of Italian immigrant women with mobster boyfriends would hop in the sack with a colored guy and then tell their mobster boyfriend about it. The Newark Riots play a minor role and at the end we see the black guy, Harold McBrayer, moving into a White neighborhood and having a pair of White movers unloading the moving truck while he smirks. Of course no mention of Newark being 83% White in the 1950s and now being only around 12% White and over 50% black, not coincidentally corresponding like everywhere else that happened with the city falling into ruin and violence. Take that Italians!
The story is confusing as hell and doesn't really add much to the Sopranos universe. In fact most of the movie has very little to do with Tony Soprano at all. The acting isn't very good and the plot is dumb. I am glad that all I had invested in this movie was a couple of hours of time I will never get back.
If you like good entertainment and especially if you like The Sopranos, give this a pass. Go back and watch the original, you will be a lot happier.
Posted by Arthur Sido at 10:31 PM