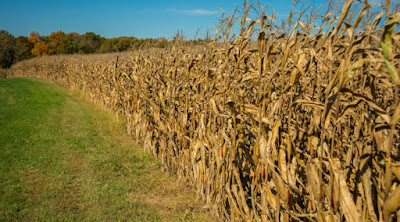 Every year seems to bring one week like this one. The weather is perfect in northeast Indiana. Our forecast called for mid to upper 70s, sunny skies and a light breeze and so far it has held true. With the humid days of summer behind us and the long winter where we don't see the sun very much ahead, time seems suspended for just a few days, long enough for the harvest.
One of the things we really love about where we live is how connected we are with the changing of the seasons. It isn't like living in suburbia where you know what season it is based on which holiday the stores are featuring. Here you see the weather turning warmer and the fields being planted. Baby colts are born and running around like crazy in their pasture. The Amish women race to be the first to get out in their garden and have their flowers planted. Pretty soon the planting of crops starts and the barren fields turn from brown to vibrant green.
Then seemingly overnight, after a few cool evenings, those green fields turn golden brown and then start to disappear. The harvest represents an ancient rite of human society that stretches back to mankind's first civilizations. The hard labor of the spring and summer yields the bounty of the harvest in the fall and with it the promise of surviving yet another winter, or in modern times the relief that comes from being able to pay the bills and purchase seed and fertilizer for the next spring.
This is a common scene around rural America but where we live there is something else that makes the harvest so wonderful.
In a unique and initially jarring contrast we also have the local Amish harvesting their crops. In one field you have a state of the art John Deere combine, a machine that will set you back in excess of half a million dollars, with the ability to cut up to 18 rows of corn at a time sweeping through fields, casting the discarded husks and stalks behind before emptying into huge tractor trailer trucks, trucks often lined up three deep because a modern combine can fill a tractor trailer faster than they can get to the grain elevator to dump the crop before rushing back. The pinnacle of American agricultural progress and innovation on display. 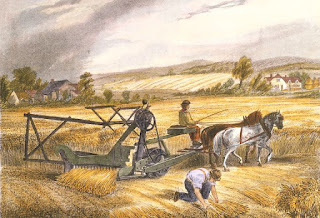 In the next field you might have a team of four Belgian draft horses plodding slowly but surely through a field of corn, pulling a corn picker that harvests two rows at a time. In the place of the roar of a combine engine and clouds of dust there is the much quieter sound of a single row corn head running and the jangle of the horse's harness. Instead of corn that has been plucked from the stalk, husk removed and shaken and sifted through screens leaving just the kernel behind, the Amish fill their wagons with corn still on the cob. Rather than ending up in giant concrete silos, their corn often ends up in corn cribs at their home to be fed to their animals over the winter and spring. While they have some modern conveniences, they harvest their crops in much the same way that farmers did in those same fields 100 years ago. Reminiscent of an agricultural John Henry versus the steam powered hammer, the Amish thrive using methods that seem quaint to our eyes and yet they prosper, often beyond their "English" counterparts.
The harvest is a season of accomplishment and consummation but it is also a wistful and melancholy time. The promise of harvest, just a whisper and a hope in spring as bare fields sit seemingly dormant while the seeds beneath the soil stir and grow unseen, has come to fruition. In normal years all the worry and fretting of impotently watching the weather to catch a window between the time the crops are ready and the fall rains vanishes as the crops come off as they almost always do. Farming makes for a powerful dichotomy. On the one hand farmers today have unimaginable technology at their fingertips. Precision farming, super efficient machinery, hybrid crops that produce unnatural yields, chemicals of all sorts to increase productivity and eliminate weeds and pests, all work together to squeeze every possible bushel out of an acre of land. Yet in spite of all the technology the farmer still spends most of the year on the sidelines, completely helpless waiting on the weather. Is it warm enough to plant but dry enough to get in the field? Is it hot and sunny but not too dry in the summer? Are the crops mature and dry enough to harvest but has the rain held off so we can get those green, red and orange behemoth machines in the field to harvest? I can't think of another economic endeavor that is so critical to our national economic security, simultaneously as ancient as mankind itself and yet driven by technology, that is still dependent on something as fickle and primal as the weather. Around here the weather has been near perfect, springtime planting went off without a hitch and we had a ton of rain and hot, humid weather when the corn was really stretching out. The yields locally are going to be amazing.
There is something sad about the vast fields bereft of crops. Where once there were acres of tall, green corn softly rustling in the wind there is now only stubble. I know that empty fields mean successful harvests and that those fields are testament to overflowing grain silos holding the American treasure from the breadbasket of our nation. I know that many farm families are smiling as they get their checks, the reward for a year of hard work and worrying. Still they make me sad. Empty bean and corn fields mean that winter is coming, just around the corner. The days will grow shorter and the extra darkness each day that I dread is also on the horizon. The joy of spring with new life in budding plants, fields being planted, lambs and foals being born, it all seems so far away, a distant and unattainable dream. I know that the winter is but a brief interlude and soon enough the horse drawn planters will be working the fields alongside massive tractors but that certainty is not enough to offset the melancholy that invariably settles on me each year at this time.
It is all part of the love-hate relationship so many of us have with the Midwest. Ours is a region that is sneered at by other parts of the country, derided as "fly over" country, an obstacle to get through as quickly as possible as the elites go from one fabulous place to another. It is a vast, flat landscape that is so awful to drive through but for many of us it is home, something deeply connected with who we are. So many of us strive for relevance and hipness but choose to live in a decidedly un-hip and in the eyes of many irrelevant region. In spite of the melancholy I feel in fall, the humid summers, muddy springs and freezing winters there is nowhere else that we feel so at home. This is where we belong, amid the generally simple people who make their living building stuff, moving stuff and of course farming. It is not glamorous, just like our football teams in the Big Ten are not glamorous (and not very good right now) but it is home.
In a world where it is easy to get completely black-pilled and feeling hopeless about the future, the harvest reminds me that for most of us the rhythms of life that have existed for thousands of years still go on. All the more reason to get out of the cities and suburbs and out to somewhere you can feel the natural world's rhythms and patterns. That can be one of the very best antidotes to the sickness of living in a world gone mad.
Posted by Arthur Sido at 7:30 AM