Put Them To The Sword

News broke over the weekend that 17 missionaries (all Americans other than a Canadian), had been abducted in Haiti. It caught my attention for two reasons, one I have been to Haiti and two the mission group is with CAM, Christian Aid Ministries, an outfit that is mostly Amish and Mennonite run. Local Amish ladies sew baby blankets and put together kits to be distributed in places like Haiti.
It is a bad situation. The kidnappers are part of some professional kidnapping outfit called "400 Mawozo" and has kidnapped protests and nuns before and demanded a million bucks per person. A a consultant named Timothy Schwartz is quoted in the linked article as asking in essence: what the fuck were a bunch of Americans with kids doing in Port au Prince?
He went on to question why the missionaries were in the area of Port-au-Prince in the first place, noting that the State Department has issued a level-4 "Do Not Travel" advisory for Haiti.
The part of the city where they were abducted "is a no-go zone these days," he said.
A good question indeed. It sounds like they were nabbed on one of their buses. I have been on those busses and the roads in Port au Prince are a nightmare, often with no discernable traffic patterns, vehicles going either direction in multiple lanes, motorbikes scooting between the vehicles. No traffic lights or road signs to speak of, it is just chaos. You would be easy prey and the busses missionaries ride around in and the presence of White people marks you as easy targets.
Hopefully they are released quickly and unharmed but it makes me pretty angry. Haitians are not all that particular about who they screw, and little details like consent and age don't mean much. When I was down there a young girl of maybe 13 who was an orphan was in the orphanage with a baby of her own, the result of being raped in the tent city that sprang up after the earthquake.
I do have to wonder. Don't we have people we train specifically for these tasks? It seems like a great opportunity to go Chuck Norris on this group.... 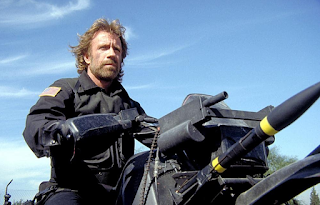 ...and send in Delta Force and SEAL Team Six. Delta is in Fort Bragg, NC and SEAL Team Six is in Virginia Beach, so both groups are just a short flight from Haiti. Given how many Americans do mission and aid work down there, it would seem that this would be a great time to find these knuckleheads, and someone would tell us where they are for a chicken and Snickers bar, drop in on them and put everyone involved to the sword. Bonus points for putting their heads on spikes as a warning.
We won't of course, we will just keep dumping huge amounts of money into training our special ops guys to do exactly this sort of thing and then not using them. The reasons are myriad but you can be sure that one reason, unspoken but real, is that sending in a bunch of special forces guys to kill blacks in Haiti to rescue White Christians is bad optics.
I am starting to think that sending a few flights of B-52s from Barksdale to pound the entire country of Haiti flat would be an enormous cost savings in the long run. That place is irredeemable and it is likely that a bunch of nice American Christians are about to pony up millions of dollars to give to some sub-80 IQ Haitians gangsters to rescue 17 missionaries that never should have been there in the first place. Heads on spikes and some free training for Delta seems like a better deal.
Posted by Arthur Sido at 8:16 PM