Piggybacking from my post yesterday, Forced Compliance, that looked at the zeal from the Left to do anything necessary to make you submit to their demands, no matter how unreasonable or ridiculous. They are quite willing, eager even, to employ any means they deem necessary up to and including driving you from the society your family built and that you help sustain and starving your kids.
An important side point is that they are relying on you taking whatever they dish out. Despite the bullshit rhetoric about "right-wing violent extremism", they are counting on White men to meekly accept whatever they push, and for good reason as that is precisely what we have been doing for decades. But not forever.
A common theme on this page is that pushing people into a corner, making them desperate and taking away the reasons they behave is a great way to get serious backlash. Yesterday a video was making the rounds of a subway in New York City and an African man punching a White woman right in the face. It was the kind of video that makes you want to say forbidden words. What was almost as bad as the brutal assault on a much smaller woman was the utter lack of reaction by anyone, especially this guy.. 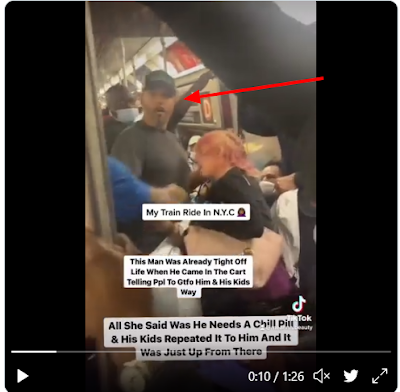 Already in this video, the African man is up in this White woman's face shouting at her and everyone ignored him. He punched the White woman and the guy just stood there with that stupid fucking look on his face. First, he should have interposed himself between this much larger man and the woman before she got hit and second after he punched her he should have beaten the hell out of the guy, or at least tried. He is a decent sized man, you would think he could toss a punch or three. A few decades ago you didn't hear about these sorts of assaults happening because blacks knew that White men wouldn't tolerate it. So what has changed?
For certain men are not as prone to and experienced in fighting. By the time I was in school fighting among male students was almost unheard of, while in earlier eras it was far more common. Most of us didn't even really know how to fight. That isn't all of it, I am much smaller than the African thug in the video and not a great fighter but I would have done something, even if I got my ass kicked.
What has mostly changed is that we are conditioned to passivity. Call 9/11 in case of trouble, get a mechanic to fix your car, watch TV and the internet. When something goes wrong, our Amish neighbors just get after it, even if they screw it up. English people don't. A few years ago we had a "Derecho" that caused a bunch of damage to houses around here. That same day Amish crews were fixing roofs while English people waited passively for weeks for the insurance adjuster to show up.
A guy sees a woman punched and his instinctive reaction as a European man is buried under a lifetime of conditioning. Let the police handle it, someone else will deal with it, don't get involved, you might get in trouble.
This is not accidental. Passivity has been intentionally ingrained in our men from an early age, from Dr. Spock teaching parents to withhold strict correction of children to public schools full of female teachers who are trained to see normal male traits as abnormal discipline problems to be stamped out and medicated. The mass media is just as bad, replacing men of heroism and action with men who lack moral grounding and courage. Apart from superhero movies of a few years back, how many films feature ideal White men who exemplify courage and initiative?
It is because of this that I constantly talk about breaking the conditioning and hardening minds and hearts, as well as bodies. In the face of people willing to starve your family to force your compliance, your resolve must be absolute. I really liked this meme tweeted out by Fenix Ammunition. 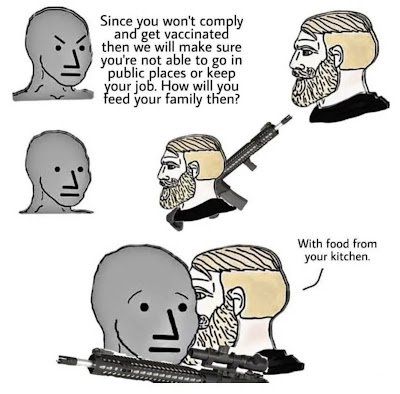 Along with this statement:
Leftists who say things like this should consider a deep dive into what Bosnia looked like between 1992-1995
They should understand what a man desperate to feed his family might be willing to do and how they might choose to do it to based on the events leading up to that desperate situation.
The percentage of people on the /otherside/ that can be reasoned with is shrinking very rapidly and soon will disappear entirely. Perhaps it is just my partisanship showing but that is the result of their choices and the manipulation of the elites, not because /ourside/ is somehow worse than we were 20 years ago. Most of the "extreme" positions and opinions I hold were very common just a few decades ago.
When you can no longer reason with people and in fact find yourself in a place where your suffering brings them pleasure, it is inevitable that things will deteriorate. Like a man wandering into the desert, they have gone too far to come back.
Start to make a mental list of things you think are currently off the table. Then start putting them back on the table on a contingent basis. Your enemy won't hesitate to do whatever it takes. If you hesitate?
You die.
** EDIT ** I am getting a lot of pushback in calling out the cowardice of Captain Stand There in the video so I will flesh out my statements tomorrow in a separate post. Call me old fashioned but I wouldn't be able to stand mutely aside if a black guy hit a White woman.
Posted by Arthur Sido at 12:00 PM