It is all so dreadfully tiresome.
Unless you live under a rock, you know about the Game Of Thrones phenomena. In 2011 the first season of the TV show based on the book series by corpulent George R.R. Martin aired on HBO and became an enormous success and then a cultural milestone. For people like me who had read all of the current books when it aired, it was amusing to see people freaking out when Ned Stark was killed and then again at the Red Wedding. You can debate the merit of the books and shows, I liked the early books, but you can't deny the cultural impact.
As the series progressed and the budget got bigger, the spectacle grew and then as most people know the show got ahead of the ponderous pace of the lardassed author of the books, Martin. Once they left the safety of the books, the series fell apart into a disastrous final season. The ending was horrible and most fans of the TV show were incredibly upset. People who read the books first are hoping Martin can recover if he ever finishes the next book, since the plot line is quite different, but I suspect that he won't ever finish the series before his diet of jelly donuts catches up to him.

If you can count on the "entertainment" industry for anything, you can count on them to milk every last dime out of any intellectual property, bleeding it dry before casting it off. GoT was a huge commercial success so of course it is time for prequels!
The first prequel series is going to launch next year focusing on House Targaryen, home of mass murdering psychopath Daenerys, and takes place hundreds of years before the events of GoT presumably looking at the rise of the House Targaryen that lasted until they were overthrown by Robert Baratheon. It is going to be called House of the Dragon and probably will have the usual GoT key ingredients, dragons and boobs. The 21 year old chick playing Princess Rhaenyra Targaryen is named Milly Alcock so that is a promising sign.
Anyway the first trailer hit and at least visually it looks pretty decent. But of course this is 2021. Even though the world of Westeros where most of the action takes place in the GoT/A Song of Ice & Fire series is clearly modeled directly from Europe, specifically England, with armor clad knights, castles and other medieval trappings, that is simply too White for modern audiences so we get this in the trailer: 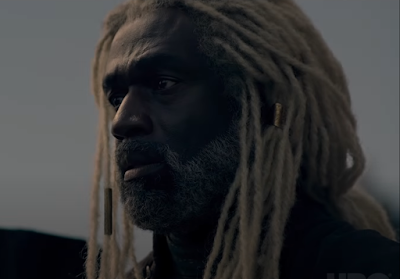 The Africans in these photos are apparently playing members of House Velaryon. That House is made up of people of Valyrian descent and Martin was pretty clear about the appearance of the Valyrians: silver hair, purple eyes, and pale skin.
In other words, the exact opposite of Africans.
On the other hand there are people who could reasonably be played by Africans in the world created by Martin. The Summer Islanders are dark skinned. The people in Dorne had olive skin like Greeks. Many people in the eastern continent of Essos are of dark complexion. But they aren't the central characters in a series set in a European style story and we can't have a show that lacks "representation".
So yeah, terribly predictable and tiresome and most fanbois of Game of Thrones won't say anything lest they be labeled a WrongThinker.
It is another example of the childish and clumsy imitation by PoCs of White culture. You might not think that A Song of Ice & Fire is worth reading, as I said I enjoyed the early books and reread them occasionally but the fact of the matter is that you just don't find blacks or mestizos creating the sort of complex and engaging worlds that White men from Tolkein and Lewis to Martin and a personal favorite Glen Cook have created. It doesn't seem that they are capable of it and that leaves them with nothing other than risible attempts to imitate and appropriate what others have created. As I wrote in Their Rage Is Driven By Jealousy they can't match us and they know it, and that is the root of their hatred for us.
They hate us because they ain't us.
Posted by Arthur Sido at 9:17 PM