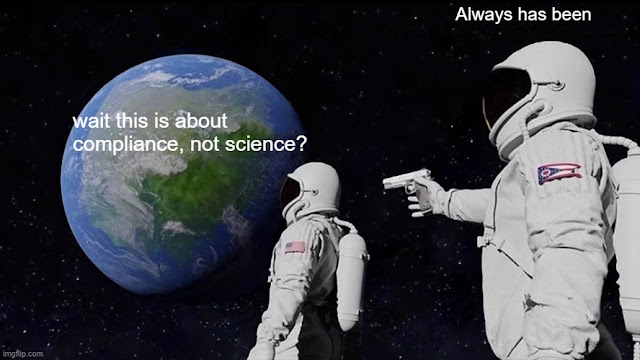 This little meme of mine gets more and more accurate every day.
It can be difficult to remember the Before Time when words like "pandemic" and "vaccine" had very different meanings. Or the early days when we naively believed that 15 days to flatten the curve might be the end of it. Oh how innocent we were back then!
Now as people realize that the "vaccine" doesn't stop you from getting or transmitting Covid and at best allegedly makes it less severe, having already discovered that the mandated masks don't do anything to stop the spread of the virus, it becomes rather confusing to the normie. Why all the rules and restrictions if they aren't working anyway?
There seems to be a subtle shift among the naturally compliant masses. More and more people are starting to speak up, often with bitter sarcasm, in response to the elite mandated "news" about the 'vid. They are starting to understand that the weird contradictions, like unvaccinated people are a threat to people who have been vaccinated without explaining what the point of the vaccine is if it doesn't actually protect you from the virus, are a sign that what they are being told bears little resemblance to the truth.
At the same time, the rhetoric from the Left is taking on more ominous tones. Gone is "wear a mask to protect grannie" and in its place we see "Wear a mask or starve to death".
Loathsome Commie Noam Chomsky recently weighed in on this issue but can I just say at the outset that he isn't aging well.... 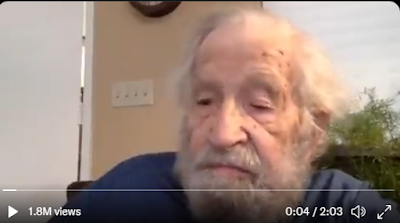 Apparently he is running out of the blood of European virgins or whatever keeps people like him and George Soros alive.
Anyway the commie zombie says that the "unvaccinated" should be "isolated" from society:
Noam Chomsky: Unvaccinated Should Be ‘Isolated’ from Society
During an interview with Kurt Gödel, Chomsky said that the topic of vaccine mandates is a “mixed story” that should strike a compromise between individual freedom and community safety, wherein the community forms a “social convention” that pushes the isolation of unvaccinated people:
People who refuse to accept vaccines, I think the right response for them is not to force them to, but rather to insist that they be isolated. If people decide, ‘I am willing to be a danger to the community by refusing to vaccinate,’ they should say then, ‘Well, I also have the decency to isolate myself. I don’t want a vaccine, but I don’t have the right to run around harming people.’ That should be a convention. Enforcing is a different question. It should be understood. And we should try to get it to be understood. If it really reaches the point where they are severely endangering people, then of course you have to do something about it.
I like the language of "refusing the vaccine" as if the default is getting it rather than it being a choice for someone to get the vaccine. I have never gotten the flu vaccine but no one framed it as "refusing" to get that shot. But it isn't just isolation he is after....
Noam Chomsky: Unvaccinated should 'remove themselves from the community,' access to food 'their problem'
After the left-wing linguist was asked what separation of the unvaccinated would look like on a practical level, Chomsky said the unvaccinated should remove themselves from the community for the safety of others and make arrangements to get food without coming into contact with others.
"How can we get food to them?" Chomsky told YouTube's Primo Radical on Sunday. "Well, that's actually their problem."
How very Holodomor of him. If you deny someone the ability to buy groceries, you are no different from those who intentionally starved the Kulaks to death by the millions.
The words might change but the nature of Communists never changes: they not only accept but seem eager to use terror to get their way. For many of the most ardent commies, it really seems to be less about the economic and political system and more about using their power to humiliate and harm other people. For them terror isn't a means to an end, it is the entire point.
Chomsky's comments drew applause from other wannabe commissars.

Mehdi here comes from whatever Islamic shithole his family fled from and now feels qualified to lecture Americans. Fuck off Mehdi. More from this camel humping shithead. 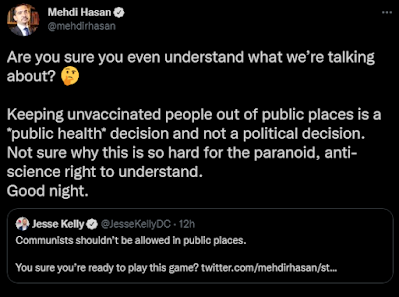 The coronavirus has killed a tiny fraction of the number of people killed by Communism so if anything keeping commies out of public places is a far more critical public health imperative, with the only exception being public places like the space immediately outside of the helicopter door and all the way to the ground. Gravity is one of the best cures for communism. 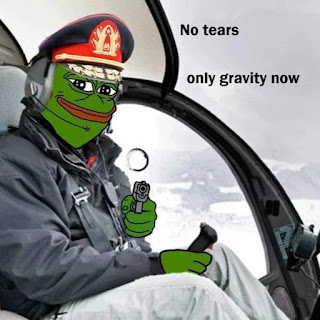 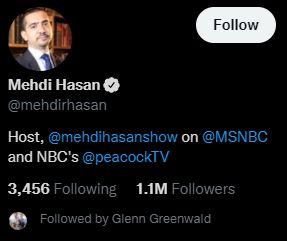 Over a million followers for this dimwit.
Keeping people from going to the movies or even flying on a plane is one thing but saying you won't be able to buy groceries for your children? That is a direct threat and is going to lead to lots of people with fake vaxx cards or angry confrontations at grocery stores, putting their employees in the awkward position of having to deal with someone who chooses to not get jabbed but selfishly still wants to feed their family. Think that isn't going to be an election year issue in 2022?
Communists like Chomsky either want your slavish obedience or if you refuse they want to see you destitute and your children starving. That sort of depravity warrants the most strenuous of responses.
Keep pushing.
Posted by Arthur Sido at 10:37 AM