People who support The Zman with a few bucks a month via Subscribestar get access to extra columns and also an extra podcast on Sunday, a shorter 30 minute deal that usually looks at a few topics in quick succession.
I listened to his podcast this morning while walking and while the whole thing was full of great stuff, one thing he said really stuck out:
The radicals always win and the reason they always win is that you can't defeat radicalism with moderation.
It brings to mind the famous Barry Goldwater quote:
“Extremism in defense of liberty is no vice. Moderation in pursuit of justice is no virtue.” 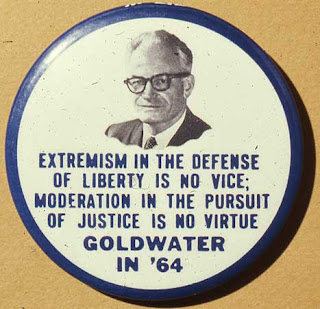 That is the sort of political prose sorely lacking today, mostly because modern politicians are too dumb to think of something like that and almost every voter is too dumb to understand the implication of that statement, or even grasp what it means.
That statement pretty well sums up the political scene as well the culture wars my entire life. The Left just pushes and pushed the most extreme stuff and what passes for the Right responds with temperance and moderation. Then they lose and the Left pushes some new extreme radicalism and the Right responds with temperance and moderation. Rinse, repeat.
It brings to mind also an older post, Fighting In A Cage Using The Queensberry Rules.
When you are in a fight for survival, all that matters is survival. If someone is threatening me or my family I am not going to challenge them to a "walk 10 paces turn and fire" style duel. To protect my family I will fight as dirty as I need to fight in order for them to survive. I'll shoot an intruder in the back if I have to. I won't feel much better standing at the graveside of my child by consoling myself with the knowledge that at least I played by the rules.
My whole life and even before I was born, conservatives have been measured in their response, willing to retreat again and again so they don't seem like mean people. The Left sees every compromise as weakness to be exploited. They don't care if they look radical, all they care about is winning.
Little wonder American conservatism has failed to conserve anything.
Posted by Arthur Sido at 1:00 PM