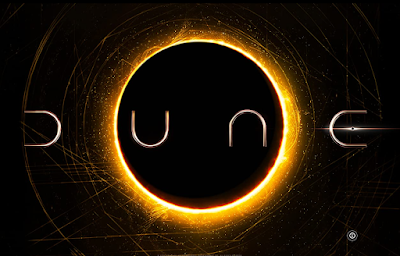 The new Dune film comes out this week and my review can be best summed up as: I didn't hate it.
Honestly, given the general shit quality of films today that is pretty high praise.
First the good.
Timothée Chalamet is decent as Paul Atreides even though he is a bit too old for the part in his mid-20s. I liked Oscar Isaac as the Duke, and Josh Brolin as Gurney Halleck was pretty good. Stellan Skarsgård is quite good as Baron Harkonnen and the make-up job they did on him was incredible and I assume will win awards. Some of the visual effects are quite impressive but I am sure on a big screen they would be even better. The Guild ships capture the immensity of them and the 'thopters are very well done.
Basically it was a decent film for the run time of 2 hours, 35 minutes. They set up the next film well and it was a natural breaking point.
The bad?
Well there was lots of that, and much of it was casting. I can't stand that Zendaya chick. She has a perpetually arrogant look on her face for someone that young and unaccomplished and she looks nothing like Chani is described in the books. Jason Momoa is not great as Duncan Idaho, he was chosen for name recognition. Same with Dave Bautista, best known as Drax in Guardians of the Galaxy, he is just awful as Beast Rabban, I mean really terrible. The black chick playing Liet Kynes, a man in the books, is useless and adds nothing but some diversity flava flava to the movie.
The movie necessarily I guess skips a ton of backstory. My wife hasn't read the book and she was very confused. She mentioned specifically Duncan Idaho and what his relationship was to the Atreides family. Why was the betrayal of Dr. Yueh so important? Who were these great houses and why did they hate each other? The amount of information left out is enormous and leaves the viewer wondering what is going on unless you are deeply steeped in Dune lore already. They are cramming way too much into two movies and in doing so are losing the enormity and complexity of the Dune universe which is what makes the book so great.
Some other stuff was left out for political correctness. In Dune the term jihad is used frequently, 36 times according to my Kindle search but they use a more generic term to avoid upsetting the haji. Also a major omission. In the book Baron Harkonnen is described as homosexual who prefers young boys and likes them drugged up so they don't struggle. The obvious point is to emphasize what an evil, degenerate the Baron is. No mention of that in the movie for the obvious reason that a bad guy can never be a homo in current day.
So lots that was bad but it wasn't the worst movie ever. I might even watch it again. But for a movie with a reported budget of at least $165 million bucks? "Not awful" isn't much praise for what they spent.
Posted by Arthur Sido at 12:36 PM