For a bunch of years, this was me: 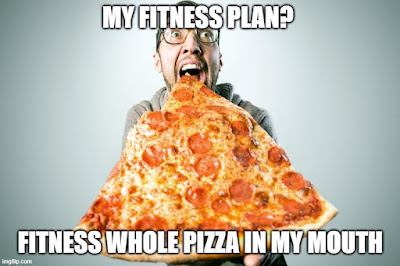 While I am not a naturally heavy person, I wrestled at 125 lbs or 130 lbs throughout high school, there is only so much your body can do when you constantly are consuming way more bad calories than you will burn, especially when those calories come in the form of simple carbohydrates and sugars. Combining a horrible diet with a sedentary lifestyle and profession and the advancing years slowing your metabolism down is a recipe for sustained weight gain.
Several months ago I started to get pretty concerned about my physical condition. It is pretty silly to talk about preparing for a system wide calamity of some sort while being terribly out of shape. There is far too much of that on /ourside/, guys around my age with a ton of cool gear who couldn't walk a mile carrying that gear. Not to mention that in my middle ages I am at a point where if I didn't start to do something soon I would be at risk of contracting some serious medical conditions that would require medications to survive, meds that likely wouldn't be as readily available in a SHTF situation. Hell, I wouldn't be surprised to see restrictions on pharmaceuticals for people who refuse to get the jab. I don't especially want to prep for something bad but then drop dead of a heart attack before it happens because of poor lifestyle choices.
We have a nearly unlimited access to calories, something that has never been the case in the history of humankind. Not just the wealthy but every person in America can eat as many calories as they want all day long. This has significant health ramifications. Take a look at this from the CDC... 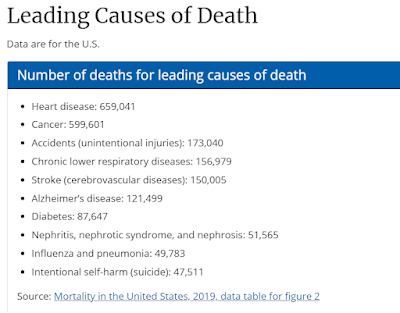 Several of those, heart disease, some cancers, stroke and diabetes, are directly tied to obesity. More about this shortly but suffice it to say, we are literally eating ourselves to death. What is more, the government is paying us to eat ourselves to death. More about this in an upcoming post.
So I found myself in a place and condition I didn't like and I felt kind of hypocritical about my neglect of my physical fitness while talking about TEOTWAWKI. In a post-cataclysm world I don't want to be out of shape and trying to adapt to a drastically lower calorie intake. Believe me, your body goes through a withdrawal stage when you radically change your eating habits and you don't want that when things go tits up.
I didn't want to say anything until I had something significant to talk about and saw some progress. But I have so I thought I would share what I am doing. We all know the basics and it is some of the most commonly known truths around: eat fewer (and better, often overlooked) calories and get some basic exercise. That is the formula and it never changes.
My plan was pretty simple and concentrated on the two sides of the physical conditioning coin. Eat better and exercise, with more of an emphasis on eating better. Here is how that looks:
Eating Better
My "diet" plan was to radically change how I consume calories. I have pretty much eliminated all of the processed sugars out of my diet: refined white sugar and corn syrup. This means no pop at all. No candy. That is pretty simple but the harder part comes when you realize that most processed foods have some sort of sugar added, even in foods you wouldn't expect. For example, this is a bottle of Heinz ketchup we have in our home. Lok at the list of ingredients. 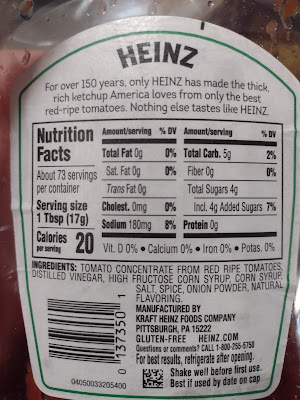 Why does ketchup have corn syrup as two of the main ingredients? Because everything is sweetened. Sort of like in the Dune universe where the spice melange is in everything and people become addicted to it.
Most processed foods have sugar added in some form to make the food sweeter and more palatable, but also more addictive. Make no mistake, our sugar craving is the result of sugar being highly addictive. A good read on this and how the government is complicit can be found here: The sugar conspiracy
It is everywhere so I try to really be conscious of what I am buying and cutting out sugar wherever possible. What I found is that initially the craving for sugar was nearly overwhelming. I have cut sugar out before and the response from my body is the same: craving sugar, headaches, irritability, many of the same symptoms of people who stop smoking. The obvious stuff to cut out is easy, not adding sugar to food or drinks you are preparing, avoiding candy and other sweets, of course not drinking pop. This won't work if you insist on drinking pop. Here is the nutritional information from a can of Pepsi.... 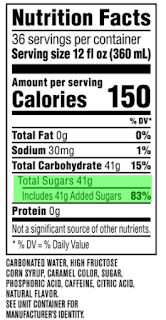 41 grams of sugar according to this page at Michigan State is equivalent to around 10 teaspoons of sugar or about 3 1/3 tablespoons. That might not sound like much but I measured out 3 tablespoons and a little more of cane sugar which is less dense than regular refined sugar and placed it on a medium sized plate next to a .45 round for perspective... 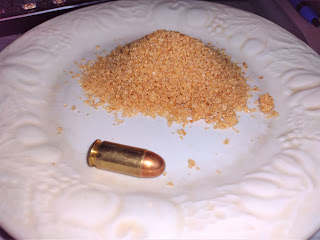 A .45 ACP round is pretty fat and there are lots of .45 rounds worth of sugar on that plate. It is more sugar than you could dissolve in a pop can worth of liquid which is why they use high fructose corn syrup, a liquid sugar concentrate. When you have it set out in front of you, it really is striking how much sugar we are talking about in a single can of Pepsi. You don't think about it when you are chugging a can of pop but you are really drinking the equivalent of a bunch of sugar. So if you won't stop drinking pop almost entirely, then stop reading.
The other part of the problem is carbohydrates. Carbohydrates are an energy source but they also convert into energy very quickly and if you don't use them? Your body converts them into fat and stores them. Our diets as Americans are very carb heavy: pizza, pasta, bread, potatoes. The famous USDA food pyramid has always had carb heavy food as the foundation, like this: