Our comrades in the media find themselves with a new role, besides being the propaganda arm of the neo-Bolsheviks and pushing The Narrative. Now they are in the business of playing whack-a-mole with all of the pesky news items that keep cropping up that threaten to make the normie sheep figure out that all is not well with our overlords in Coruscant. 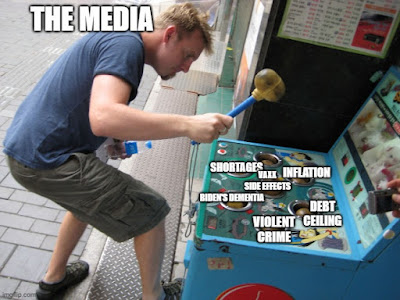 The ominous news keeps piling up and it spells trouble.
Winter heating bills set to jump as much as 54% as inflation rises
That's is a nice way to go into the colder months. Worth noting, the story comes from USA Today, an establishment propaganda organ so it isn't just some "conspiracy" site.
UK's "Chicken King" Warns: The Era Of Cheap Food Is Over
and also....
Food Prices Hit Highest Level in a Decade
That isn't a huge deal for people on food stamps as they can always just give you more "money" on your EBT card but middle and working class families who have to pay for their own food? The squeeze is coming. The breakfast meals at the local greasy spoon where we occasionally eat has had significant increases in their menu prices, like 20% or more, and we are talking eggs and potatoes. Expect much higher prices and shortages in key staples.
Futures Jump On Profit Optimism As Oil Tops $85; Bitcoin Nears $60,000
Gas here locally hit $3.39 yesterday, which is the highest I can remember for a very long time. We are threatening to get into Obama-era money and breaking through the $4/gallon barrier.
Global Ship Backlog Just Got Even Worse As New Supply Chain Nemesis Emerges
Too much stuff, not enough capacity, too few workers. I hope you got what you wanted to buy for Christmas already because the popular stuff is going to be gone. Actually I hope you don't buy much or even anything and stop supporting the consumerist system entirely.
One of these by itself would be problematic but all of them at once, hitting right when we see the flu and/or Covid season kicking back into high gear? Yikes.
It is going to take every ounce of the very, very limited intelligence of the media in America to hide this from the sheep. We might be about to find out if the acceleration theory is true because the pedal is pushed almost all the way to the floor. The extremes on both sides want it to happen, I guess we will discover which side was correct.
Posted by Arthur Sido at 1:32 PM