They Have Met The Enemy And He Is Us 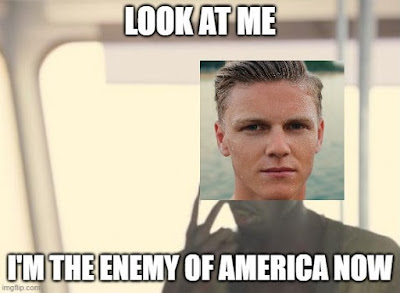 Over the last nearly half century I have seen administrations come and go. Most were headed by people a step away from being retarded and the rest were deeply flawed to one extent or another. Still, all of them were at least tacitly optimistic and seemed to at least sort of like the country they were supposed to be leading.  Obama was the closest to being anti-American but even he thought he was going to lead this country to greatness in his own image. His "Hope" stuff was dumb but at least had the pretense of optimism. Generally they talked about bringing American together and stuff, it didn't ever happen other than for about a week after 9/11 but they made the right noises.

Then November 2020 happened and opened the door for the occupational regime of former Vice President Joe Biden to take over. He hasn't been in office that long, as he creepily reminded us at the G7 meeting:
That wasn't demented sounding at all. Regardless, only around 8 months into his occupation and things are getting pretty sketchy. Thousands shot in our big cities, with mass shootings every weekend that are mostly ignored by the media. Economic instability, trillions of dollars of new "money" appearing from thin air, skyrocketing inflation, a looming housing bubble as prices get crazy again, the promise of more lockdowns and new vaccine mandates and the foreign policy disaster in Afghanistan. We have lots and lots of problems in America but the occupational regime has pinpointed the real problem....

AG Merrick Garland: “In the FBI’s view, the top domestic violent extremist threat comes from racially or ethically motivated violent extremists specifically those who advocate for the superiority of the white race.”
pic.twitter.com/4JtruuMSv2

Garland was supposed to be on the Supreme Court. What a disaster for heritage Americans that would have been. Trump's picks have been a little spotty but at least they don't openly hate us. Openly anyway.
There are lots of articles about this sudden and absolutely ludicrous decision that suddenly White people who are insufficiently self-loathing are the greatest threat this nation faces. Tucker Carlson had a decent and fairly lengthy segment about the whole thing. The best part was when he pointed out that even using the inflated numbers of "White supremacist" killings, there are still more people killed by lightning strikes than "White supremacists!":
Yes, White supremacy is America’s biggest problem. As we’ve noted many times before, we still don’t know, despite fervent efforts to find out, what a white supremacist is. The White House has never told us. They have refused. As of tonight, It’s a term without a definition. They should send it to us, we would read it on the air. And yet, they scream, it’s the greatest threat we face. Because we are highly literal on this show, we went looking for the numbers. Are there numbers to prove that? They’re busy trying to create them right now. Researchers are the University of Maryland run something called the "Global Terrorism Database." Some of the data they produce are clearly political. They count the Parkland school shooting as an act of white supremacist violence—it wasn’t. There’s no evidence but they say it anyway. But even with the inflated numbers, the researchers could find fewer than 70 people in the entire country who died from white supremacist violence between 2015 and 2019. Of course, it’s too many—any death is too many. But, for some perspective, more people die every year from lightning strikes, literally. So, no, white supremacist violence—as bad as it may be—is not a major threat.
Are these people being killed by....White lightning perhaps?
A significant escalation happened just a few days ago when George W. Bush declared that domestic "violent extremists", aka regular White Americans, were at least as dangerous as and motivated by the same "foul spirit" as the 9/11 hijackers and mass murderers.
Don't dismiss Bush as an irrelevant dimwit. Although that is true and he is, his statement was a powerful stamp of imprimatur from a prominent establishment Republican on the narrative from the Left regarding White people. The Republican Party at the establishment level has written off most of the Republican base as dangerous and uncontrollable and mostly seems to be clamoring for us to re-invade Afghanistan. Pat Buchanan has a good piece about the Bush 9/11 20th anniversary speech: Who and What Is Tearing the US Apart?. Here is an excerpt:
What is Bush saying here?
That Ashli Babbitt, the Air Force veteran shot to death trying to enter the House chamber on Jan. 6, and Mohamed Atta, who drove an airliner into the North Tower of the World Trade Center in a massacre of close to 3,000 people, are “children of the same foul spirit.”
That is exactly correct, as Pat almost always is. RTWT. We are supposed to believe that Mohamed Atta, a villain who should never be forgotten for allegedly masterminding the 9/11 attacks that resulted in the deaths of 3000 Americans, is basically the same as an American woman, a veteran no less, who was murdered in cold blood for "trespassing" in a public building. 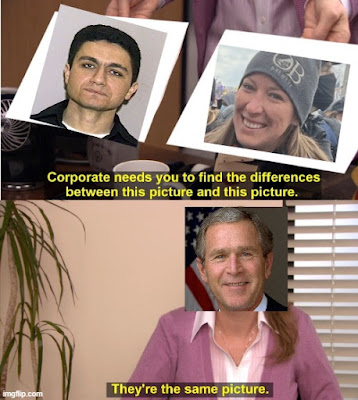 Either Bush is too stupid to understand what he is saying, which is quite possible, or he is fully aware of the ridiculous comparison and said it anyway. If you disagree with the political narrative and go so far as to protest in a way that caused some very minor property damage, then obviously your motivation is the same as a person who led a band of Islamist loons to murder thousands of people and causes billions in damage.
Only a sociopath or someone who holds a visceral hatred for America and the American people would make that claim. Bush appears to be both and his words, echoed and praised by the neo-Bolshevik Left, are dangerous in the extreme. Glenn Greenwald made a very important point in an interview with Tucker:
January 6th is being used as a pretext for a surveillance regime and a detention regime. Remember what was done in response to 9/11: a sweeping new surveillance apparatus under the risible name of "The Patriot Act" and the opening of Guantanamo Bay as a permanent detention facility for those deemed dangerous to the state who were also too dangerous to be allowed to stand trial. Here is the really bitterly ironic part:
The people who were most supportive of the Patriot Act, indefinite detention in Guantanamo and the use of torture on terror suspect are now the most likely to have those measures used against them.
Do you think the Feds would hesitate to grab some "right-wing extremist" leader and ship them off to Guantanamo Bay under the guise of "fighting terror"? We already have political prisoners with people like the January 6th protesters, James Fields, soon Kyle Rittenhouse and Derek Chauvin. You are the enemy of the state now and all of those "anti-terror" tools are being aimed squarely at you and me.
The government of the United States has openly declared that the people of the United States are the enemy of the United States. The rules of engagement with the enemies of the state are shifting by the minute and we are only seeing the beginning of what they have planned.
Posted by Arthur Sido at 12:21 PM