Their Rage Is Driven By Jealousy 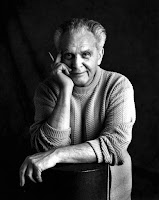 So here is this heroic black fantasy character, revered by Africans, and his character was created by a couple of pasty Jewish guys. Oy vey!
A second example, a little farther back. In 1976 a novel was released by an African author named Alex Haley titled Roots: The Saga of an American Family, the story of an African slave named Kunta Kinte and his successive generations of progeny. The novel was made into a very successful miniseries of the same name in 1977. I remember it being on TV but didn't watch it at the time and never have bothered. Roots is considered one of the masterpieces of literature and cinema from an African.
But hang on. I learned a little something about Roots and Alex Haley. In 1978, Alex Haley was sued by a man named Harold Courlander, pictured below.

Mr. Courlander wrote a book in 1967 titled The African and lo and behold, it turns out that Alex Haley did a little plagiarizing of that book when writing his own. By a little I mean like a lot. At least 81 passages worth. A court and multiple experts agreed with Mr. Courlander and he won his suit:
Courlander and Haley settled the case out of court for $650,000 and a statement that "Alex Haley acknowledges and regrets that various materials from The African by Harold Courlander found their way into his book, Roots."
Back in those days, $650,000 was an enormous sum of money. According to a Bureau of Labor Statistics $650,000 in December of 1978 is worth in today's "money":
$2,626,566.47
Dats a lotta dough.
That is just the first two examples I thought of off the top of my head and neither landmark of African culture is really African, or at best they are adaptations by an African that leans very heavily on the writings of a non-African.
When a non-White person is intentionally cast in the role previously played by a White person or is cast as a historically White figure, it is just a cheap and childish imitation like a little girl putting on mommy's lipstick and high heels. It can be cute but no one takes it seriously. They can cast a homely African woman named Lashana Lynch to replace James Bond but it isn't James Bond and no one thinks it is. Adults will just watch reruns of older Bond movies which are still far more entertaining, no matter how dated they might be.  Idris Alba as the Norse god Heimdall is just ridiculous and silly. Forcing Africans, Middle Easterners and South Asians into Western characters and settings comes across like a cheap knock-off.
They mean it as an insult to us, a slap in the face but really it is equal parts pitiful and hilarious.
Why do they keep doing it, when it generally has poor box office results and isn't fooling anyone?
Out of jealousy.
That is what really drives their hatred. Not slavery, not "racism", not any of that other bullshit.
Jealousy. In short:
They hate us because they ain't us.
Why are black women so angry all the time? Not because they are "exhausted" but because they know that of all the groups of women in the world, their racial group is the least attractive to men across racial boundaries. You see lots of famous African guys, athletes and entertainers, with White girls or Asian girls but how many wealthy White or Asian men have an African chick? Not very many. African men know at a very deep level that they have utterly failed to create anything comparable with what White men have created. They were enslaved and held in bondage for centuries until we let them go and in the 150 years since they haven't really ever done anything noteworthy as a group other than setting new records for violent crime.
We are hated by lots of people with a white hot rage and in spite of what they always are trying to convince us of, it isn't because of how we have wronged them but out of jealousy and envy. Box wine aunties are pissed that no one asked them to the prom and they are in their 40s with a shriveled up uterus and no family. The average antifa misfit looks like someone who got their ass kicked in high school every day and their lives are now dedicated to inflicting the same misery on others that they have lived with their entire life. Africans and others like to pretend to be us and appropriate our cultural icons but they are childish and clumsy imitations.
Jealousy and envy are some of the most powerful human emotions and we see on display daily how those emotions drive the rage of our enemies.
Arthur Sido at 1:41 PM
Share