The W Stands For "War Criminal"

It is a fitting reminder that 20 years after 3000 Americans died on his watch, war criminal George W. Bush should come out and remind us what a liar and piece of shit he really is.

Bush alludes to US Capitol rioters when condemning violent extremists behind 9/11 attacks
Former President George W. Bush called on Americans Saturday to confront domestic violent extremists, comparing them to violent extremists abroad and warning that they are "children of the same foul spirit."
In a speech marking the 20th anniversary of the 9/11 attacks, Bush said the US has seen "growing evidence that the dangers to our country can come not only across borders, but from violence that gathers within."
"There is little cultural overlap between violent extremists abroad and violent extremists at home," Bush said. "But in their disdain for pluralism, in their disregard for human life, in their determination to defile national symbols, they are children of the same foul spirit."
"And it is our continuing duty to confront them," he added.
Bush's speech at the Flight 93 Memorial in Shanksville, Pennsylvania, came eight months after violent insurrectionists breached the US Capitol on January 6 in an attempt to stop Congress from certifying the 2020 election for President Joe Biden.
The former President is using the same language used by many on the Left who have declared that not only was the "breach" of the U.S. Capitol on par with 9/11, it was actually far worse. Like this c-word. 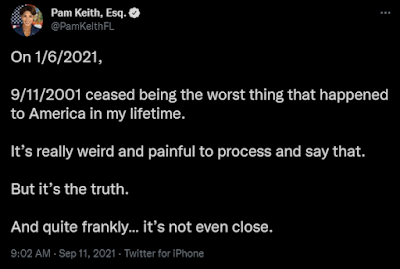 The statement by Bush was praised by Biden and most of the Left. Are American citizens, many who voted for Bush, that were angry over the results of what by any reasonable examination was a questionable election and entered the U.S. Capitol building really of "the same foul spirit" as the hijackers who murdered thousands of Americans? What about "the same foul spirit" that "disregards human life" inhabiting President Bush, a man who lied us into two different wars that claimed over 4000 American lives in Iraq and another 2,400 Americans in Afghanistan, not to mention the hundreds of thousands of innocent lives lost by civilians in both countries? What about that "foul spirit" you piece of shit? George W. Bush should have been tried for war crimes, found guilty and summarily executed by a tribunal for his actions but instead a man who was compared to Hitler by the Left when he was President is now lauded for his "bravery" and his shitty paintings.
George W. Bush has the unjustly shed blood of more American soldiers and civilians on his hands than any President since Lyndon Johnson.
Bush is a mass murderer without peer in the 21st century. Not only that but he is the most visible member of what is generally a family of awful people who have been corrupt going back to at least his grandpappy Prescott Bush. They are a family of patricians who hate the people that they suckered into voting for them and now shit all over us to get applauded by people who think they are buffoons.
Our rulers of both political parties are the worst people in our society. A pox on all of them and especially on the Bush clan. I can't believe I voted for that motherfucker twice. I can't say more on this subject without Fedpoasting so I will leave it there.
Arthur Sido at 12:45 PM
Share