I was thinking more about this absolute idiocy from Gary DeMar reagrding the Haitian "refugees"....

Word this morning is that the Biden regime is turning these people loose in the middle of the night to the tune of thousands and thousands of Haitians coming soon to a neighborhood near you. None of them will be shacking up at Gary DeMar's house.
There are lots of things I despise about organized religion but the foreign missions hustle is near the top of my list. If you are easily offended when it comes to your religion, you might want to stop reading here. Also if you feel compelled to proselytize for your flavor of religion, skip it. I have spent the better part of 25 years deeply steeped in a variety of religious traditions and I know all the arguments and reject them completely. Save your cyber-breath.
Spend any time in a church of almost any flavor and you will invariably run into missionaries to foreign nations who are back home begging for money on furlough. The scene is the same. They show up on a Sunday, often with a little table set up in the hallway with trinkets from whatever shithole they are doing mission work in. They do a presentation with a slide show complete with pictures of the missionary family smiling next to some impoverished black or brown children. At the end there is often passing of the plate for a "love offering" and some inspirational message from the pastor. Maybe they sing a song or something.
It is a dog-and-pony show but it is necessary to keep the monthly checks coming. People are less likely to vote to keep sending monthly checks to people they never see or hear from, so you show up every once in a while and send letters or emails to be read from the pulpit so your donors feel they are getting a return on their investment.
What no one seems to ever ask, because doing so would be frowned upon as "missing the point", is whether what these missionaries are doing is really working. The point is supposed to be to "make disciples", in other word converting people to Christianity. That is the gist of the Great Commission.
"And Jesus came and spake unto them, saying, All power is given unto me in heaven and in earth. Go ye therefore, and teach all nations, baptizing them in the name of the Father, and of the Son, and of the Holy Ghost: Teaching them to observe all things whatsoever I have commanded you: and, lo, I am with you alway, even unto the end of the world. Amen." (Matthew 28:18-20 KJV)
Making new disciples, baptizing them and teaching them to be Christians. That is the name of the game. How much of that is happening? I suspect very little, at least very little that comes via American missionaries. In reality I don't think that is what the whole mission work thing is really about anyway, basing these comments again on decades of thinking about and studying this very question.
Mission work is really more about strengthening the resolve of current members than making converts. Short term mission trips to places like Guatemala are very popular in evangelical churches. They are tightly controlled and very safe, more safe than going to Detroit, so you feel OK about sending your teen daughter to a lawless place. They don't do anything while they are there, when I was in Haiti we mostly just played with the "orphans", many of whom were not really orphans but had been dumped at the orphanage so the dumb White people would provide them food and shelter and school. The group that sponsored my "mission trip" to Haiti, The Hope Community Project, has since stopped doing orphan care and focuses instead on orphan prevention because of this: 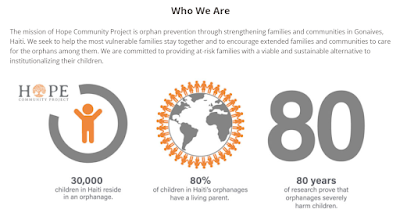 I used to know these folks very well, great people, and I am sure that what they are doing now, while far more effective, is a harder sell. People love to donate to orphanages and don't care much about whether the orphans are really without parents or not because the little thrill of "doing something" is all they care about.
An even better example are the young men sent on Mormon missions. They live very sparse, spartan lives cut off for the most part from friends and family. They go out many days of the week to knock on doors and if they are lucky get a polite decline. Either you convince yourself that what you are doing is worthwhile or you quit and go home. The goal, in my opinion as someone with some experience, is less about making converts and more about making Mormons who are more committed in their faith.
Back to my main point. Gary DeMar is all excited about all of these "unreached" people coming right to Texas so churches in Texas can proselytize them. The thing he seems to not understand, and that most Christians don't understand, is that you don't need to bring Haitians to Texas so you have some people to evangelize because there are already plenty here.
It is a well known fact that religious adherence is plummeting in the U.S. According to Gallup in 2018, only half of Americans were members of an organized religious body: U.S. Church Membership Down Sharply in Past Two Decades 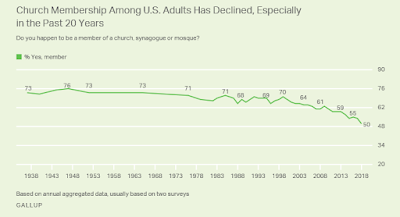 That percentage has dropped precipitously as the social cost of not being a member of a religious body has evaporated:
On average, 69% of U.S. adults were members of a church in 1998-2000, compared with 52% in 2016-2018.
That is huge but it also corresponds with the widespread realization that the Catholic church had covered up child sex abuse for decades, something I am confident has led to lots of Catholics no longer attending Mass.
As anyone with a little inside knowledge knows, the church membership rolls have little to do with reality. Many churches leave people as members years after the person moved or just stopped coming to church. I would estimate that many churches have twice as many members as they have regular observant attendees.
So what?
Here is the so what. There are upwards of 350 million people in the United States. If you are being super generous, less than half of those are even mildly culture Christians and fewer still are really devout, attend regular services and have even an elementary understanding of their faith. Realistically I would guess that at best 1/3 of Americans are actual Christians, with the rest having some very tenuous relationship to Christianity or being part of one of the various non-Christian religions and sects that are part of the landscape.
Add in the 38 million Canadians just across the largest undefended border in the world who share a common language and (sort of) culture in a nation where religious observation is if anything even more hit-and-miss and you have even more people who "need Jesus". That would give us a number of "unreached people" in the U.S. and Canada of maybe....
250,000,000
A quarter of a billion people.
Hey Gary, you don't need a couple thousand Haitians to proselytize, there are a quarter billion of them right in your own backyard.
Instead of a church of a 100 faithful members sending a few thousand dollars to foreign missionaries in Ghana or Bangladesh, why don't those 100 members just evangelize their own neighbors? Even in the "Bible Belt" there is a high percentage of people who are "lost", much more so in places like New England and the Pacific Northwest, and there are millions of American Christians already in the U.S. who could reach them. Why isn't that the focus instead of tossing money at foreign missionaries?
Because most American Christians don't want to be bothered.
That sounds harsh but it is true, even for clergy.
American institutional organized religion, rhetoric aside, is almost entirely focused on keeping existing members rather than growing the flock. Save me the "well my church", I am talking about the Christian church as a whole. The percentage of Christians who never share their faith is enormous. This is something I have spent years writing about. The professionalization of the clerical class allows the average Christian to subcontract the work of ministry that is supposed to be equally their task to a professional minister. We pay your salary so you can go minister to people, and so we don't have to but what that mostly means is "give us a sermon on Sunday and visit us when we are in the hospital, marry and bury as needed".
See, a lot of Christians think that putting money in the offering plate and voting to support foreign missionaries is somehow them fulfilling the Great Commission. They would never admit that of course but their actions show it to be true. I know that when called myself a Christian that applied 100% to me and to almost everyone around me.
So Gary DeMar can go STFU and get out pounding the pavement in Atlanta where there are millions of "lost" people. The Christian church doesn't need to import people needing Jesus, there are plenty right here and right now. The simple truth is that most of his people don't want to be bothered and would rather just pay someone else to do it for them, preferably out of sight.
Posted by Arthur Sido at 10:29 AM