As I have mentioned a time or two, I was a political nerd in a very politically engaged family from an early age. As a kid I read National Review and opinion columns in the local paper, and as a family we watched Crossfire and The McLaughlin Group (I met John McLaughlin at their studios, not kidding, when he was standing next to me at a urinal).
Back in the 70s and 80s when I was growing up there was definitely a liberal "type", or rather there were two types of liberals. There were the old school liberals like my maternal grandparents who believed that the social programs of FDR's New Deal saved America. They were mostly more recent immigrants and working class. They also were not huge fans of the coloreds or the slanty eyed devils (aka Japanese) or Arabs or anyone who wasn't White. The other kind of liberal were younger, the bleeding hearts who grew up in the 50s and 60s and saw their classmates get drafted to fight in Vietnam, often coming home in flag draped coffins. They were the Michael "Meathead" Stivic types from the Archie Bunker show, always yammering about civil rights and free expression and how awful war is and how they hated The Man.
The times they have changed. A lot. 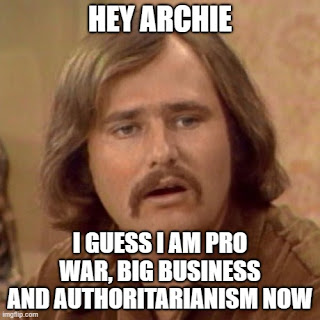 John Wilder had one of the better takes on the whole General Milley calling the ChiComs to reassure them that he would commit treason give them a head up before we attacked them, a post that is thoughtful and historically grounded with none of the hysteria or empty bluster: General Milley, The Vanguard Of The American Caesar
Sure there was never any real reason to think we would attack China, Trump certainly didn't have any plans to do so, but just in case Milley was letting the Chinese know he had their back. The revelation of this obscene action has led to the creation of a new Orange Man Bad narrative: we were on the precipice of nuclear war with China because Trump is crazy and only General Milley bravely circumventing the chain of command and violating the civilian control of the military saved us from annihilation.
They really believe this.
As John explains, the civilian control of the military is there for a reason. The military doesn't pick and choose who to kill, that is the job of the civilian government elected (theoretically) by the people. When that line is blurred? Trouble.
What’s dangerous is that it sets the military up as being able to define the noun.  They get to do all the killing of people and breaking of stuff, but now they get to pick who they kill and what stuff they break.  That’s the dangerous point – the Rubicon.
Milley is temporarily being lifted up as some sort of folk hero by the left and that is pretty damn weird. My comment on John's post (and please RTWT):
Without a basic understanding of history it is hard to comprehend how radical the political shift in America has been. As a relatively astute political observer as a yute in the 70s and 80s I couldn’t imagine a Democrat/liberal person cheering on a general who had gone rogue like this. Those people hated the military. Today the “my body, my choice” people are in the vanguard of demanding people be held down to be injected or summarily shot, and either is fine, and applauding people accused of trespass being held in solitary confinement and without bail. It is remarkable and not in a good way.
That is my basic point here. In my lifetime the Left has moved from free love and civil rights and borderline anarchist free expression to authoritarianism and a slavish devotion to war and the military. How many Democrats have expressed their glee at the thought of using the military to crush dissenters in the U.S.? These are the same people who screeched for decades about the killing of students at Kent State 1970 and they are openly aroused at the idea of soldiers shooting right-wingers. 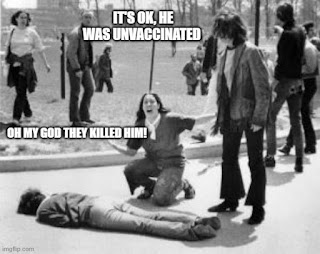 At first this seemed weird to me. How could people in a political movement change that drastically? But it quickly dawned on me that the hippie era was just a brief aberration, a momentary and temporary shift in leftist ideology driven by spoiled kids who wanted to smoke pot, hump in public and above all not go to Vietnam. The core of leftist ideology was never about free love and flower power, it has always been about control and domination. That is why today's left looks a lot more like the the Chinese Red Guard from the Cultural Revolution (see: The Cultural Revolution, Take Two!) and very little like the long haired dope smokers of the 60s and 70s.
The Left has never been about justice or equality or peace, those are bullshit buzzwords used briefly. It has always been about controlling and dominating others.
So the real change in my lifetime was not a wholesale shift away from the core of American liberalism, it was simply a reverting to kind by the ideological step-children of Stalin and Mao. Treating our political and cultural enemies as merely wayward hippies is a lethal error. They cannot be reasoned or bargained with. There is only one way to win this struggle or merely survive it and that won't happen in the comment section of social media or via the ballot box.
Posted by Arthur Sido at 8:42 AM