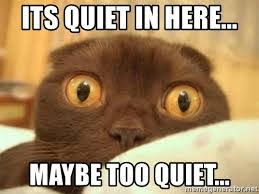 Are we in the calm before the storm?
Things have been really quiet, especially since the disastrous withdrawal from Afghanistan. Sure there was the vaccine mandate that won't stand up in court but otherwise kinda quiet and that makes me wonder what is going on. I wrote a month and a half ago in Tick Tock, Watch The Clock that the two big new proposed regs from the ATF had their comment periods expiring soon. Well those dates came and went, the "ghost gun"/expanded receiver definition comment period ended August 19th and the rules that would essentially make most or all braced AR/AK pistols into short-barreled rifles ended on September 8th, ten days ago. Crickets from the ATF.
Then we have that glowie "rally" today in D.C. that literally everyone is saying "STAY THE FUCK AWAY!" but will go ahead as scheduled. For what possible reason would a sane person go to that fiasco? You won't find more Feds in a single place unless you hold a seminar on shooting dogs and women holding babies. Stay as far away as you can, I might spend the day in the most western part of my house just to maximize the distance from D.C.
The ATF sure as hell isn't going to abandon those two regs after all that, so what are they waiting for? Perhaps a flag that is false?
That is why the quiet seems so ominous.
Keep your heads on the proverbial swivel boys. My spidey sense is telling me that something is brewing.
Posted by Arthur Sido at 7:08 AM