Never Ever Give Them Up

Each day brings us new level of idiocy from our cosmopolitan ruling class. It is as predictable and reliable as the sun rising in the East. One recent example comes from the loathsome former neocon, current warmonger, David Frum. You will be hard pressed to find a more revolting character, one that better epitomizes the worst of the coastal elite snob who doesn't understand the first thing about America or the actual American people but has never let that dissuade him from passing judgment on the unwashed masses who do useful work for a living.
As someone who scribbles inane ramblings for a living, Frum went from a Republican party insider to a frothing at the mouth NeverTrumper as the Republican party moved, at least at the grassroots level, away from the party of tax cuts and perpetual wars of aggression and more toward a working class populist movement. Frum helped to lie us into the wars in Afghanistan and Iraq while at the same time you can be reasonably certain that neither Frum or any of the close members of his families picked up a rifle to help "liberate" either nation. Dying in the wars he helped create is the task of the lesser Americans who live in places other than NYC and D.C.
His latest facile essay is vintage Frum: an article no one asked for, written for people who already agree with him about people he doesn't know or understand, on a topic that he lacks even the most cursory understanding of. He has made quite a lucrative career out of being wrong. The essay in question appears on the pages of The Atlantic, a once mildly relevant magazine that now hosts predictably leftist opinions from wealthy elites, read by a handful of other wealthy elites.
Online the article is titled How to Persuade Americans to Give Up Their Guns which is a milder version than the headline in the print edition that no one reads....

Oh. 400 million guns owned by more than 100 million Americans and not a one of them is a responsible gun owner according to Frum. A more honest headline would have read:
White People In The South And Midwest Are Dirty And Dumb And I Hate Them
Instead they went with Responsible Gun Ownership Is a Lie.
How does Frum intend to persuade Americans to give up their guns? Well he doesn't really explain it at all, just some random comparisons to drunk driving and creating social pressure for people to give up their guns. His "solution" is as dumb as the rest of the article and is about as useful as tits on a boar. The people he wants to give up their guns are people like me and people like you, and probably most people you know that understandably realize the old saying is true when it comes to protecting your family: when seconds count, the police are minutes away.
Frum no doubt lives in a tony zip code with a significant police presence and likely at least some private security to boot. If he calls 911, a cop is likely there in a matter of a couple of minutes.
For someone living where a call to the police might mean a 15 minute or longer wait? It is not quite so easy to be blasé about the need to have the means to protect yourself and your family.
Steve Sailer does a great takedown of Frum's imbecilic rhetorical equivalent of a popcorn fart in a hurricane here: David Frum: How To Persuade Americans To Give Up Their Guns. Here is a choice quote:
America has a lot of guns and a lot of blacks and thus has a giant problem with blacks shooting each other. It’s doesn’t have all that big of a problem with whites shooting each other nor with blacks shooting whites.
One reason that America has surprisingly few Clockwork Orange-style home invasions with urban criminals driving out to the boonies to attack locals is because Boonie-Americans tend to be so well-armed.
In places where the people are known to be likely armed, invading a house is a terrible idea. It would seem to be a great place, remote rural homes with very little traffic should be easy pickings for criminals but criminals know that going into a house like mine means a near 100% chance of shots fired. So instead we see them doing things like carjacking people in gun-controlled Chicago which is on pace for back-to-back years of 1000+ carjackings, an average last year of nearly 4 per day.... 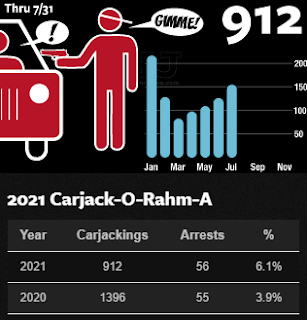 Meanwhile just about two weeks ago a discovery was made in the Ukraine that is chilling (HT: Matt Bracken)...
Stalin-era mass grave found in Ukraine
The remains of between 5,000 and 8,000 people were found in 29 graves in the southern city of Odessa.
The site, believed to date back to the late 1930s, was uncovered during exploration works for a planned expansion of an airport.
Hundreds of thousands of Ukrainians are believed to have died during Joseph Stalin's rule of the Soviet Union.
This was one of the photos shared from the site, the shoes of the victims of Stalin and his reign of terror. 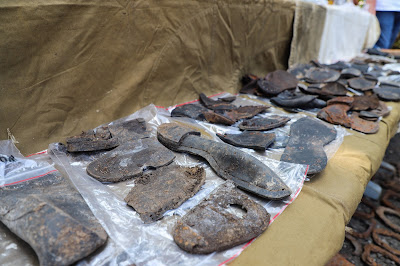 This is just one of the mass graves in the Ukraine, not nearly as large as the mass grave in Bykivnia which contains the remains of 100,000 or more people murdered by the Stalin regime. Nor does it include the other mass graves or the millions who died during the Holodomor. The mass graves of "enemies" of the Soviet Union are all over Eastern Europe and Russia in places like the Katyn forest where 22,000 Poles were murdered and buried by the Soviet Union.
Think about this for a second. The crimes of the Third Reich are well known and documented but here we are some 80-90 years later and still finding mass graves of the victims of Bolshevism. How many countless hundreds of thousands, or even millions, will never be found? Russia is a big and desolate country. Can you even imagine a giant pit where thousands of people were shot and dumped because they were insufficiently obedient to a totalitarian government? You better start to think about it because the corpses of the Poles who were marched into the forest and shot testifies that this is not only possible but probable. 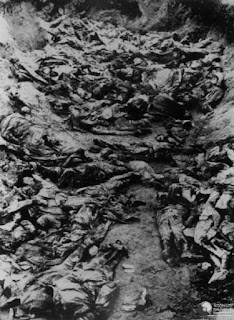 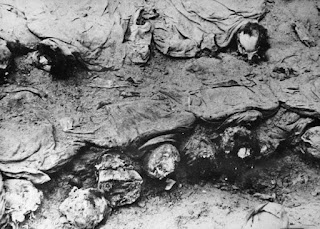 The people who ordered and carried out the mass executions of enemies of the state and political dissidents, millions upon millions of victims, are the ideological progenitors of the militant far Left that operates with impunity in America and across the West today. There are no real "Neo-Nazis" left, not in any real number and certainly not enough to form a softball team. But the other totalitarian ideology of the 20th century, the real enemy we should have crushed in the 1940s when we had the chance? Oh it is still here.
The mutant step-children of the most murderous political ideology known to mankind wave flags and march in our cities right now.
David Frum knows this. He doesn't give a shit about accidental shootings or suicide by firearm. Do you think a man who knowingly and unrepentantly lied us into a war that led to thousand of dead Americans and hundreds of thousands maimed really cares about some White kid in Arkansas accidentally discharging a gun? Of course not. The man is as much a sociopath as he is an intellectual midget. What Frum does know with all of the certainty his tiny mind can muster is that an armed people are a free people and the opposite is true, a disarmed people are no longer citizens but subjects.
So no David, I don't think I will let you persuade me to give up my guns. Not today. Not ever.