While David Frum tries to convince law abiding Americans to give up their firearms, the people actually doing the mass shootings in America don't seem to be subscribers to The Atlantic. Like Keshawn Dawson for example... 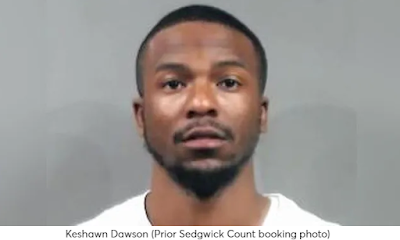 Who is Keshawn? He is a suspect in a recent mass shooting in Wichita, Kansas of all places.
Wichita police seek man accused of killing 1, injuring 5 in shooting at Old Town club
The story is pretty typical of mass shootings in America.
Officers were called around 12:40 a.m. Tuesday to a shooting at the Enigma Club & Lounge in the 300 block of North Mosley. Police said the had been kicked out of the club after a fight, returned with a gun and opened fire from the sidewalk through the club’s front door and windows. He then fled in a dark-colored vehicle being driven by someone else.
This is a common theme. A fight or altercation breaks out and an African starts blazing away in anger. He was shooting from the sidewalk into a building so odds are the person he was mad at didn't even get hit but he still decided that the reasonable response to being kicked out of a bar is to shoot into a building full of people just trying to have a good time. If only someone had given him a copy of David Frum's essay before that night.
According to the Gun Violence Archive, we are at 482 mass shootings in 2021 and we still have almost four months to go. 8 months are in the books and the U.S. is averaging almost 60 mass shootings per month. 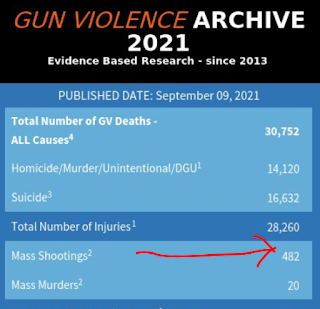 In 2020, a year that saw a huge uptick in mass shootings, there were "only" 612 mass shootings throughout the year. If this pace of 60 mass shootings per month continues, we are looking at blowing that number away with over 700 mass shootings in 2021 but again it will only get minimal news coverage (see: The Biggest Story Not Told In 2020). No one seems very concerned about this and we are also seeing some peak idiocy, like San Francisco paying criminals to not shoot each other.
Hopefully you get the picture here. Gun control advocates like David Frum don't care about gun violence, they simply don't want armed citizens who can resist what is being done to them. It is not about reducing gun violence. It never was.
Posted by Arthur Sido at 1:00 PM