The news came out today that the White House is withdrawing the nomination of David "Punchable Face" Chipman to be the new head of the BATFE, aka ATF, aka AFT.
White House to withdraw controversial ATF nominee David Chipman
What a huge victory for the 2nd Amendment, disbanding the ATF is just around the corner!
Uh, no. Like I said almost a month ago, The Chipman Distraction, it won't really matter
Is Chipman terrible, both as the potential head of the ATF and as a human being? Absolutely. Should people who care about the Second Amendment oppose his nomination? Again absolutely and I wrote both of my Senators, Mike Braun and Todd Young, and both responded that they would oppose his nomination. Will it really matter? No and this is why...
There are 1000 potential candidates who can replace Chipman that are just as bad.
Face it, we aren't getting a pro-2A director of the ATF. If Chipman fails to get confirmed by vote or by withdrawal, it isn't like Biden's handlers are going to say "Oh well, I wonder if Ted Nugent would like to head the ATF?". No, they will just roll the next anti-2A rubber stamp for the gun control lobby out and that person will be confirmed. Someone is going to be confirmed by the Senate and whoever that is will be virulently anti-2A. "Elections" have consequences, even fake and gay stolen elections.
Meanwhile the 2A community burned a lot of money and capital to defeat this guy. For what? So we can get a different anti-gun stooge who will probably sail through the nominating process and do the exact same things that Chipman would have done.
Put the champagne back on ice. We didn't win anything and the squeeze is going to just increase from here.
Still, Chipman is an asshole. Fuck that guy. 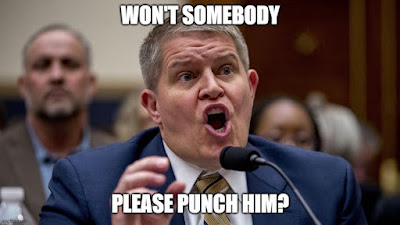