Dave Cullen has another new video up and it hits on the second part of the ridiculous shift in Hollywood, not the casting of non-Whites in White roles but instead the insistence on casting women as ass kicking action heroes in the most cartoonish way possible.

The shift from women like Ripley in Alien who perseveres mostly because of sheer determination and a little luck or Sarah Connor to modern wahmen gurl powah garbage is pretty stark. I want to look at one in particular, Sarah Connor, in the first two Terminator movies. In the first movie released in 1984 she is a girlie-girl, a weak and soft waitress who has an enormous burden cast on her by the knowledge that her son will save humanity. Her son, not her. Seven years later we find Sarah Connor in a mental institution because of her belief of a robot uprising, while her son and presumed savior of mankind, John, is a juvenile delinquent. The transformation is startling, gone is the 27 year old soft woman in a pink waitress uniform, having been replaced by the hard as nails 35 year old inmate who works out where she can and is endlessly planning on making an escape.

She is pretty ripped in the movie, according to what I have read she worked out under professional direction for 3 hours a day, six days a week for 13 weeks before Terminator 2 was filmed and "could bench press 85 pounds". 85 pounds isn't much to bench press for a guy who worked out that hard but for a 35 year old woman, it is a lot. Eventually she is shown photos of Arnold as the Terminator in the current day and realizes she has to put her escape plan before he finds her into action, which she clearly has thought about a lot. That leads us to this scene (Hamilton learned to pick locks for real for this scene):
Remember that according to John, his mother would basically shack up with guys who could teach her how to fight and survive. Still, she relies on surprise and weapons to get past the male guards and orderlies.
The first guy she pummels is Douglas/Dougie, an orderly who seems to enjoy hurting the patients. He finds the broken mop in the broom closet and then Sarah whacks him several times in the head with the length of handle. She surprises him on the first hit and then finishes him with several more shots to the head. After that she drags him into her room, grunting with the effort. According to IMDb, the guy who played Douglas is 6'4" and is clearly very portly so I am guessing he weighed close to or over 300 pounds. A few scenes earlier he beats the crap out of Sarah Connor, at one point kicking her across the room and into a wall, but here she overcomes him by surprise and using a weapon. She doesn't kung fu chop him because he is just way bigger than her, so she uses her broomstick which she then abandons for his night stick.
As she works her way to the front she hides from the bad Terminator who is disguised as a cop. She doesn't confront him head on, he has a gun after all.
When she gets to the first control room, she charges the guard and Dr. Silberman, distracting the much larger guard by throwing her keys at him over his head, which causes the instinctive reaction of him reaching up to catch them, exposing his midsection which she then pops multiple times with the night stick right in the solar plexus, and you don't really have to hit someone that hard in the sternum, especially with a piece of hardwood, to disable them. Knocking him out, she then smashes the hand of Dr. Silberman who is 50 at the time of the filming, and then uses a vial full of sedatives to keep the guard down and the empty vial filled with drain cleaner in Silberman's neck.
The threat of the syringe of drain cleaner allows her to get the three other guards to unlock the door so she can get past them. In a modern movie she would beat up the two men but here she gets them out of action with Silberman as her hostage.
A fourth guard grabs the syringe out of Silberman's neck and Connor hits him in the chin and then, while he is off-balance, shoves him to the ground but, and this is important, he pops right back up and goes after her while she runs. Once she loses the advantage of surprise, she bolts instead of pounding the much larger men.
It is a well run scene and is mostly realistic. Being on a night shift at an insane asylum would lead to a lot of complacency so the surprise makes sense and not much in the sequence seems unrealistic. If you hit anyone with a 3 foot piece of broom handle right in the face, they will go down. I also liked that she choked up on the broomstick as a woman naturally would.
Contrast that with this nonsense from Iron Man 2.
The only two purposes for this scene are a) Scarlett Johansson in a skin tight suit showing off her boobs and b) making sure you know that she kicked the shit out of a whole bunch of men, men who are supposed to be professional security, while Happy barely could handle one. That isn't how it works in real life.
We can see that in the recent obscene exhibition where a man, Ryan “Alana” McLaughlin, who is a tranny, beat up a 35 year old woman named Celine Provost in an MMA fight. Ms. Provost is a nobody in women's MMA, itself a grotesque spectacle, with two amateur and two "professional" losses and no wins. She was probably the only woman they could talk into tangling with Mr. McLaughlin. "Alana" as he likes to call himself was a special forces soldier when he was still Ryan. This is apparently a picture of him back in the day... 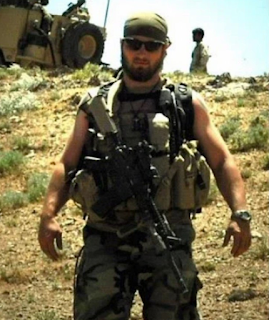 He isn't very tall but is pretty stocky. No idea what the fuck happened to him, I assume special ops guys are normally pretty alpha male but maybe he is suffering from mental issues after his tours and thinks he is a woman now. This what he looks like todat. 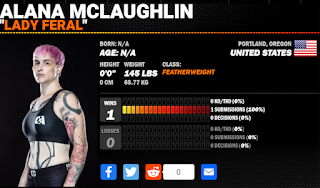 Pink hair and breast implants or a padded sports bra or whatever, he is still clearly a dude. The "fight" is available on Youtube here. Only watch if you have a strong stomach, I started the video at the 12 minute mark.
I am not an MMA expert but the fight up to this point is awful. The girl he is fighting is pretty badly winded already and he is obviously poorly trained, throwing wild punches that rarely connected. The best part is the commentator saying that it is all about technique and skills and strength doesn't matter right before Ryan gets tired of fucking around and just picks Celine up. 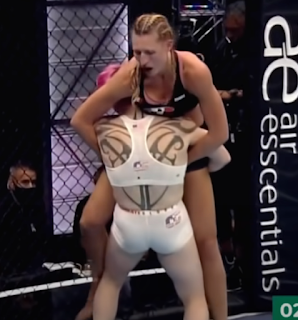 She looks terrified and helpless. It was awful technique, at least from a former wrestler's perspective, he basically just dives into her midsection and muscles her into the air. At this point Celine is all done, he dumps her on the ground and starts popping her in the face and a minute later chokes her into submission. 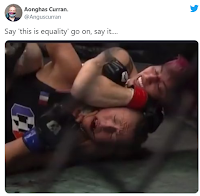 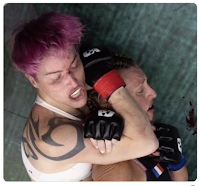 After he "wins" he lets out a girlie scream of triumph that you know he practiced so it sounded "feminine". In a sane world, a guy who fought a woman and then choked her into submission would be arrested but instead the Left is forced to applaud a man beating up a woman because he says he is a girl now. Again, the fight technique was awful. He doesn't know how to throw a punch nor a kick apparently. He won not because he was the more skilled fighter but because he got bored and charged into her, picked her off the ground and choked her.
That is what happens when a woman gets into a fight with a man. There might be some women who can legit beat up a guy, there are girls who manage to beat boys in high school wrestling, but in general in virtually every single case the result is like this. In high school I wrestled at 125 or 130 pounds and was pretty strong for my size and I can't imagine any girl of that size wrestling me with any success.
It makes me wonder how many women get smacked around in various settings because they watch movies and see little women beating up huge men and think they can do the same? You can see plenty of videos of men beating up female cops before a male cop shows up to intervene. That makes the world a lot more dangerous for everyone.
I find it pretty gross that men are entertained by women fighting each other in the first place but the idea of people paying money and singing the praises of a man beating up a skinny woman is degrading to the people cheering this on and shameful for our society as a whole. The people who make these films with girls beating up men as a vehicle for trying to humiliate men as a whole are doing women a disservice.
Let women be women.
Posted by Arthur Sido at 10:33 AM