Driving Us To A Cashless Society

Cash "money" meaning paper Federal Reserve notes and coins is terribly problematic for the government. I can use cash to buy stuff/services or people can buy stuff/services from me and the government doesn't really know about it. They hate that. People simply cannot be permitted to engage in economic activity without the guidance and blessing of The State. Plus they can't take their tithe of the transaction and they also can't track and monitor what we are doing and that drives them crazy.
Add in crypto currency and you have a whole new level of "none of your damn business" to the government, allowing regular people to exchange currency electronically and mostly anonymously. That is really irritating and what is worse, people buy crypto and then sell it for a profit and the government doesn't get a cut of the earnings. How outrageous!
It is a basic feature of our modern life that most of what you buy and sell is monitored, tracked and the data is then monetized. Amazon knows what you are buying from them and so does Facebook if you have the app installed on your government handheld surveillance device smartphone. Add in your credit card company and the Visa/MC system and the vast majority of your sales and purchases are tracked from start to finish.
Leave it to our overlords to not be satisfied with that.
The Department of the Treasury's proposed May 2021 document titled: General Explanations of the Administration’s Fiscal Year 2022 Revenue Proposals contains all manner of nonsense but one section has gotten a great deal of attention. Here is the relevant section, screenshot by me from the official .gov website on September 6, 2021. 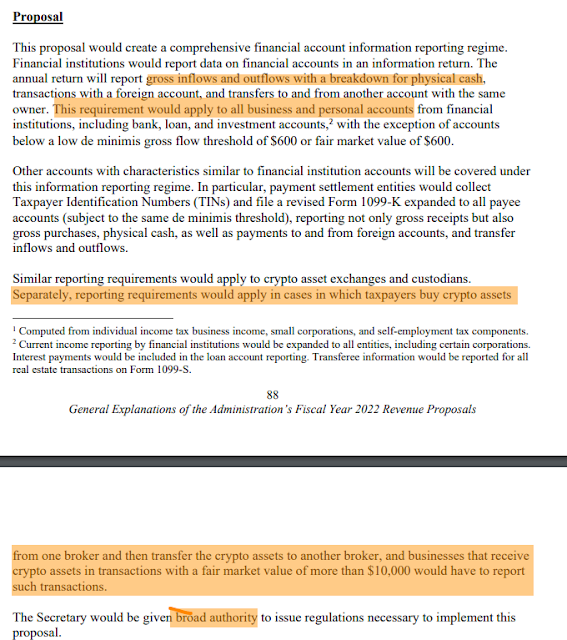 Critical points are highlighted but the one that should grab your attention is the "breakdown for physical cash". As most people know, banks are required to report cash transactions, in or out, of $10,000 or more. What most people don't know is that banks also report on "suspicious" cash transactions of large amounts, for example if someone is making multiple large cash deposits staged in a way as to avoid the $10,000 reporting threshold.
Now? According to the proposal anyone with an account balance of over $600 would have their physical cash, in and out of the account, reported to the Feds. Not to mention just moving money from one account to another internally, something we do between our business and personal accounts all the time.
The second piece has to do with trying to get a handle on crypto currency transactions as they know darn well that people are doing all sorts of freedom and they don't get a piece of it.
Granted it is a little vague, I assume from what I am reading that it pertains to all accounts at the individual account level but I guess it could also just mean totals for each account type. It is safe to assume it is the former. That would mean the Feds getting a report showing them how much cash goes into and out of your account annually. Presumably that is to flag your banking practices in the event you are running a lot of cash through your account that doesn't seem to jive with your tax return. There are lots of reasons why you would have a lot of cash deposits that don't result in a tax liability, for example we often buy things online for Amish and they repay us in cash which we then deposit and use to pay back on our credit card.
Regardless, this is an enormous intrusion into our lives and yet another regulatory burden for banks, which creates higher costs that are then passed on to us. Should this go into effect I wouldn't be surprised to see banks start to levy a surcharge on cash deposits and withdrawals. Not kidding, holding cash on-hand was considered an expense for my branches when I was a bank manager and we would get bitched at if we were carrying too much cash on hand. Why not just use your card, cash is a hassle and we are going to charge you extra to use it?
The government doesn't really need to know how much cash I put in my account or take out. But they want to know and if the government wants to know something about you, you can be sure it is not for your benefit.
This is also critical to remember:
Tracking and reporting is only one step removed from controlling.
There are already ample examples of people being shut out of the financial system for WrongThink, including the recent example of Michael Flynn having his Chase credit cards cancelled. Remember I have been saying that you should get your money out of the big GloboHomo banks.
The more information the government has about you, the more they can control you and the harder they make it to use cash, the easier it will be to shut you down from doing business in the world because you can't get a credit or debit card. On the flip side, the more you are forced to use plastic to transact business, the easier it will be for them to control what sort of things you can buy. It is already a pain in the ass for firearms dealers to get credit card processing, the larger outfits that cater to small businesses won't do business with gun stores. It will be pretty easy for the card companies to decide to not conduct transactions from businesses that sell guns and ammo, a decision that will be made easier for them when they start getting sued because LaDonabooty used her Bank of America card to make a straw purchase for her baby daddy Darnellquicioius and he shot up a nightclub.
Think about how you can conduct as much of your business outside of the traditional banking world and figure it out soon because the squeeze is coming.
Posted by Arthur Sido at 11:29 AM