It is generally assumed and accepted that when /ourside/ finally gets pushed too far, when the comforts that act as our self-imposed shackles no longer are enough to hold us, that we will pull the trigger, metaphorically or literally. That mindset assumes a certain restraint on the part of The Powers That Be (TPTB), a mindset of playing defense because they are scared of pushing us.
TPTB know full well what they are dealing with, and I am not talking about the public imbeciles that you see on TV. Pelosi, Schumer, AOC, Ilhan Omar? They are just tools, mere pawns who are happy to have their little power spheres while attracting all of our attention. The real powers are behind the scenes, pulling their strings. 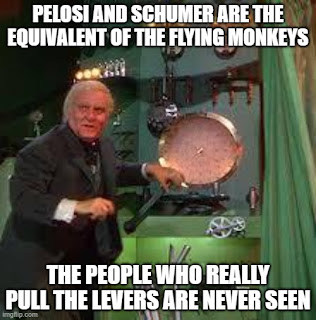 TPTB are aware of the numbers.
- 74 million Americans voted for Donald Trump and most of them are rightly convinced that the election was stolen.
- There are several hundred million firearms in private hands in the U.S.
- The 74 million people who voted for Trump have the bulk of those firearms.
- The civilians ranks include millions of military veterans, as well as current and active duty law enforcement and military and many, probably most of those were also Trump voters.
Add those numbers up and season with social media that allows those people to talk to each other and you have a combustible mix. They know this.
TPTB know what we are talking about online. They or their cronies are reading our comments and posts. The anger and the sense of having little left to lose is palpable. The only thing keeping things from breaking loose is the threat of jail time.
But what they also know is that most of us have too much on the line right now, we are too comfortable and content. So we mutter ominously online but keep walking the line and they keep squeezing. Sooner or later, sooner I am assuming, things are going to get bad enough for enough people that first one and then many are going to say "Fuck it" and do in real life what they talked about online.
In 2002, a pair of Africans, an adult named John Allen Muhammad and a minor named Lee Boyd Malvo, had the nation's capital in a panic in what were known as the D.C. Beltway Shootings. They planned to murder White people and cause a panic, which they succeeded in doing. Ten people were murdered in a short span by the pair who used a shitty Bushmaster AR-15 and had minimal training. In total the pair killed 17 people and wounded 10 others. 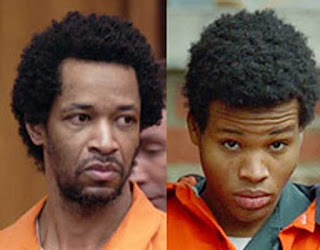 Two knuckleheads paralyzed the D.C. area, with people terrified to get gas for fear of being shot. This pair were serial killers you likely haven't heard of because they were black and most of their victims were White. The point being that these stooges caused a ton of damage in short order so you can only imagine what people with a modicum of training could do like some disgruntled Navy SEALs.
So TPTB know they are dealing with fire and have been measured, squeezing a little at a time to keep the people they are eradicating from getting too jumpy.
What happens if they go a little too fast and it looks like people are going to jump the gun and push back. Hard. Then they will get desperate and this is what we know about desperate people:
Desperate men do desperate things.
Desperate powerful men? They do powerfully desperate things.
If there is anything that makes the powerful desperate, makes them wake up at night in a cold sweat, it is the idea of no longer being powerful. That fear drives everything they do, even more so than their obsession with controlling others. Having tasted once the intoxicating nectar of power, nothing will stop them from hanging on to it.
People like us don't understand this because we have very little power at the personal level. Maybe you are a middle manager but you report up the chain of command to someone else and of course lawyers and the harpies in HR are always there to second guess you. Being a parent means having some control over your children but that starts to evaporate as soon as a baby figures out that if she cries you will pick her up and it only goes downhill from there.
But to those with power, it defines their existence. People with a little power, like the aforementioned HR harridan or the clerk at the DMV who capriciously decides if you get your license plate today or not, have a little taste of it but people with real power? It is a drug and they need a constant fix. Drug addicts are willing to do unthinkable things to get the next fix, things that normies who have lived sheltered lives can't even imagine doing but the stories of people who were decent, upright folks getting hooked are as common as lobbyists on Capitol Hill.
There are ample historical examples of pre-emptive actions taken by desperate, powerful people. The Japanese bombing of Pearl Harbor or Operation Barbarossa, the invasion of the Soviet Union by the Third Reich. Perhaps a sunny day in September.
My point is this. Be careful to avoid letting your mind get into a box. There are two sides at least in this Cold War and it isn't just /ourside/ that is waiting for the green light. If it looks to TPTB like we are in danger of slipping the leash, don't think for a second that they would hesitate to start first. What keeps them from doing anything too overt right now is that most of us are content to watch things come apart for now. If it looks like the pot might boil over? Who knows what kind of storm they would unleash. Desperate times.
The signs of the times are not just for us to watch for the green light, they are also to watch for the point where TPTB decide they can't do things incrementally anymore and fire up the trains to the gulag. Better for you if you see it coming because if it happens you won't have much time to prepare.
Posted by Arthur Sido at 8:51 AM