Today is the first day of September, and that means that we are 8 days away from the expiration date (9/8/21) of the comment period for ATF's proposed rule 2021R-08 that would create a new scoring system that would essentially turn most AR/AK pistols with stabilizing braces into short-barreled rifles requiring an NFA tax stamp (see: Tick Tock, Watch The Clock for details).
I see nothing that would indicate to me that the ATF has any intention of backing down from this proposal since the current and likely future head of the bureau are openly opposed to braced pistols and this rule is certainly in step with their marching orders from the White House.
The industry seems to be preparing for the doomsday scenario that would all but eliminate manufacture and sale of new AR/AK pistols. Just last week I was getting emails from a distributor that claimed high-end AR manufacturer Daniel Defense had suspended production of their braced pistols. 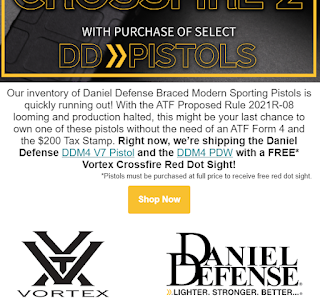 Right now Daniel Defense has a number of their AR-15 rifles listed in stock, something unheard of most of the last year. But their AR pistols are all showing out of stock.
Then last night I was on a different manufacturer website that I have used for the last 18 months, kind of a lower-mid tier outfit that makes ARs. Their dealer prices are back to pre-pandemic/riot levels on AR rifles but then I checked AR pistols and....well, wow. My dealer cost on an AR pistol from these folks was well under $400. That for a firearm that lists at MSRP over $900 and is selling retail on their site for $750. That tells me that they are expecting these to go bye-bye really soon so they have them priced to move. If you are sitting on thousands of 10.5" and 7.5" barrels, yeah you better get them out the door pronto or you might get stuck with them. They would probably rather these AR pistols be scattered around to FFLs than sitting in their warehouse. So yeah I ordered one because crap why not for that price?
What these couple of examples mean, just speaking as a small fish in the firearms pond, is that the industry is bracing for Armageddon when it comes to AR/AK pistols in just a few weeks. At the risk of sounding like a broken record, I wouldn't wait until the ATF declares the new rules are in place if you are in the market for an AR pistol as prices will spike immediately. Get yours now if you want/need one.
Posted by Arthur Sido at 7:00 AM