An Eye On The Longer Term

We used to raise hogs around the homestead with a Tamworth boar named Thunderloins and a gaggle of sows. Lots of little piglets came and went, mostly sold to other people. The problem is that Thunderloins, while friendly, was enormous at somewhere north of 500 lbs, as were the sows, so the chow they ate cost more than the value of the piglets we sold. That was OK while I was working in corporate America but as we transitioned out it became cost prohibitive so we got rid of the pigs, at one point swapping Thunderloins for bitcoin which I then turned into physical silver. Had I waited, that boar would have been worth tens of thousands. Ah well.
A few years have gone by and as it looks like we are in for a sustained period of hardship which will include progressively worse food insecurity, we are taking steps to plan ahead. Not just for the next six months but for years down the road.
To that end, we are back in the pig business. We just brought these two lovely ladies home this week. 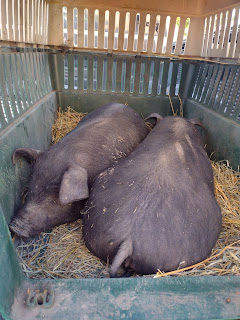 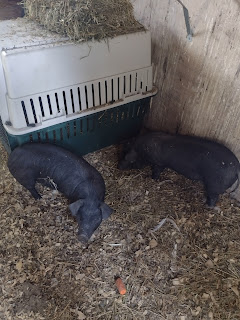 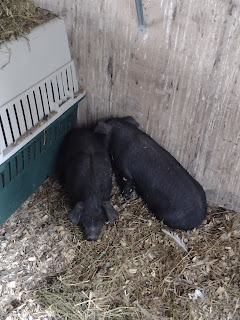 They are American Guinea Hogs (apologies to an Italian-American readers). Compared to most commercial breed they are very small, males only 200 lbs at maturity and females around 150 which equates to a hanging weight of around 100 lbs. They are very friendly and easy to handle and unlike commercial hogs they do quite well on forage and on pasture. Most of the bacon and pork you get in a store comes from a confinement raised hog that ate a mostly corn diet their entire life. Being a much smaller animal, we can handle the butchering ourselves without the need for a means of lifting the carcass in the air. We can hoist up a 100 lb carcass without much trouble.
Another addition we have had a month or so...
This young lady is our Murray Grey heifer. She is not very friendly but we are working on her. She will be ready to breed in spring with a calf the following spring of 2023 so not a quick process at all. 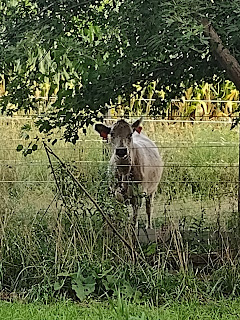 Murray Grey cattle are known for producing great beef on forage, instead of requiring large amounts of commercial feed to finish out. See the pattern here? We are trying to avoid depending on the vast oceans of feed crops that are grown commercially in the U.S. While you can't directly eat most of what farmers raise in America, much of those crop lands are used to raise animal feed to give you the cheap meat you find in the store. That cheap meat relies on cheap grain which in turn relies on cheap fuel and massive amounts of fertilizer and pesticides. Absent that? You aren't getting the cheap burger you have come to expect at the store. So we are intentionally finding livestock that do well without the need for massive quantities of corn, soybeans and antibiotics to thrive, operating under the assumption that such necessities might not be available in the intermediate future and having no desire to eat lab grown protein or bug paste.
I am looking into meat rabbits that will also thrive on lower quality forage, but that is a project for down the road. We have some laying hens but probably need more, and again more of the heritage breeds who do well picking around the farm yard and eating bugs rather than chowing down enormous amounts of corn and blowing up into enormous birds in a few weeks. Many heritage breed chickens are dual purpose, with males that have enough meat to make it worth while to butcher them and hens who lay a decent quantity of eggs.
Most of human existence has included a struggle for sufficient daily calories. Right now we have unlimited cheap calories available from the store but what if that supply chain shuts off?
Think about what you can do, right now today, to be prepared for a world with empty grocery stores. Canned food only will last so long.
Posted by Arthur Sido at 1:57 PM