A favorite on /ourside/ is the old 13/50. It is great because it is simple to explain and impossible to refute. What 13/50 used to mean was that 13% of the population, blacks, commit 50% of all murders in America. Again, easy to use and explain and that is critical on social media. Most people don't have the time or critical thinking skills to sit through a lengthy explanation of a subject but 13/50? They have time for that.

There are a few problems. First, it isn't really 13% since murder is almost entirely committed by men, and also generally by African males in the age range of early teens to their 40s, so it is more like 4-5% of the population commits half of all murders. Still, people understand when you talk about a small percentage of the population committing half of all of the murders.
The other problem? The percentage on the other side keeps climbing. It was 50% but for the last several years at least it was in around 52% so the more accurate meme is 13/52. But then came the explosion in violence in 2020, a trend continuing in 2021 and even accelerating, and the new FBI violent crime data is out and hoo boy....I'll let Steve Sailer give you the headline:
FBI: Murders Up 4,901 in 2020, Black Share of Known Murder Offenders Reaches Record 56.5%
The critical word there is "known" because an awful lot of murders are never solved. Steve sez:
But, the big news is that while the number of known murder offenders (who can therefore be tabulated racially) increased by 17.3 percent, the number of Unknown murder offenders grew 36.0%. Traditionally, murders in black neighborhoods tend to have the lowest clearance rate, what with snitches getting stitches.
So the black share of murder offenders likely went up even more.
In places like Chicago there are lots of unsolved murders, as the culture lends itself to personal retribution and taking vengeance into your own hands. That leads to charts like this, courtesy of Hey Jackass! 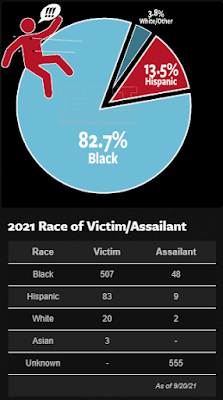 A huge percentage of the 613 victims in Chicago are black, 82.7%, but of the killers 90% are unknown racially. However it is a safe bet that since most people are murdered by someone of their own race that 80-90% of the 555 unknown murderers in Chicago are African. Charles Murray offers some additional evidence from New York City to support that claim...
Many African lives have been taken by violence, but of the 1,906 African deaths in the New York shootings database for which the race of the perpetrator is known, 89 percent were killed by Africans. Ten percent were killed by Latins. Just 0.6 percent were killed by Europeans. Of the 7,858 Africans who were wounded in shootings, 90 percent were shot by Africans, 9 percent by Latins, and 0.4 percent by Europeans.
Murray, Charles. Facing Reality (pp. 59-60). Encounter Books. Kindle Edition.
If we take that to be universally applicable then the percentage of black murderers certainly goes way up when we take that into account for the unknown assailant category. What is more, as Vincent James pointed out on Gab, the category of White murderers includes most mestizo killers in an intentional obfuscation of the fact that Whites, the largest racial group in America, commit a tiny fraction of the total murders per capita. 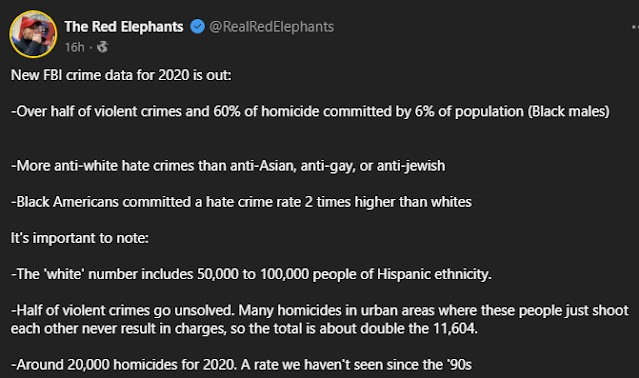 It is an indisputable fact that one small segment of the population, African males, commit the majority of all murders, the vast majority of mass shootings and in general far more violent crimes of all sort per capita than any other group.
So....13/56?
Any conversation about criminal justice that doesn't start with that fact is useless and likely designed to confuse and distract.
Posted by Arthur Sido at 7:23 PM