It was muy caliente in Chicago over the weekend, both the weather and the bloodshed. As of early this morning the weekend tally at Hey Jackass! is over 80 shot. 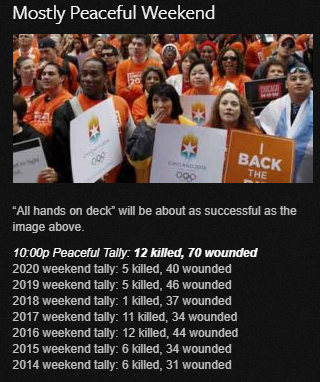 A metric on Hey Jackass! that I watch is the "shot clock" that measures how often someone is shot and also tracks murders. For most of 2021 it was hovering at a little over one shooting every two hours but recently it broke the 2 hour barrier and now is showing someone shot more frequently than once every two hours. 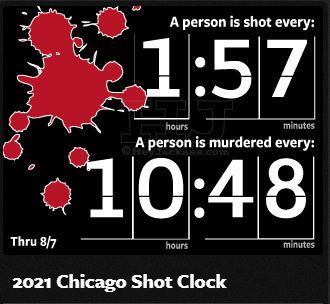 For most of the people reading here, it is hard to imagine living somewhere that sees someone shot more often than once every 2 hours. Where I live, and most of where we have lived in our years as a family, shootings are incredibly rare, like once a year or fewer and almost always some sort of domestic situations gone sideways. Other people in this country are living in virtual warzones and seem OK with it. Sure they talk about how bad things are and they scream and carry on when their baby boy with a rap sheet full of violent crimes mysteriously gets shot for no reason whatsoever but as a community they don't do a damn thing to turn things around. They keep getting knocked up by multiple baby daddies, they keep living in neighborhoods where their sons, already short on smarts and impulse control, are steeped in a sewer of glorified violence and encouraging lashing out over any perceived slight. They keep lining up behind community activists and clergy who talk a big show but are mostly concerned with monetizing black on black violence for their own benefit.
*Update*
She apparently isn't recently off maternity leave and has no children. How did the Lugenpresse screw that little detail up?
Something else happened in Chicago this weekend and that should get more attention. During a traffic stop two Chicago cops were shot. One died and the other is in critical condition and fighting for his life. The cop who died is a 29 year old woman named Ella French, who is reportedly just two months removed from having a baby. 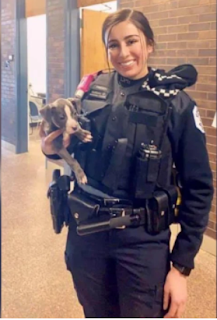 What the hell is going on that a 29 year old woman with a two month old baby is out doing traffic stops in one of the most violent cities in America? Various pictures of Ms. French show what looks like a friendly and sweet woman, but a woman who was out tangling with the worst pieces of trash the world has to offer.
How many moms need to die in the line of duty? How many times do we have to see a female cop being overpowered by a male suspect and needing to be rescued by her male partner? Being a cop is a tough gig and I don't have any interest in doing it but I also have no interest in seeing women placed in harm's way out of some misguided bullshit egalitarian sentiment driven by angry lesbians and Marvel movies to think they can go toe to toe with an average man. Not to mention all of the young women who have come back from the futile occupations of Iraq and Afghanistan missing limbs or deeply scarred emotionally.
A nation with cities wracked by endless gunfire with law enforcement being carried out by women mothers of 2 month old babies isn't a nation that deserves to survive. Too bad Trump wasn't a fraction of the totalitarian "literal Nazi" dictator they made him out to be because if he was, this shit wouldn't be going on.
Posted by Arthur Sido at 9:06 AM