What Has Gone Before Is Unimportant. What Comes Next Is Critical.

The parallels between the interwar Weimar Republic in Germany and modern America are well documented and the comparison is mostly solid, given the technological and demographic differences. Both were marked by rampant degeneracy, economic uncertainty, social tensions and of course rampant inflation. Weimar didn't last long but in the aftermath came something quite different, something that changed the course of Western civilization. The question facing the observer of Western decline today should be: what comes next?
Every honest student of contemporary affairs can tell that the Western style of liberal democracy fueled by a capitalism-socialism fusion is on it's last legs. We can see the race to keep printing new "money" to stay ahead of inflation will eventually collapse on itself. The only reason it hasn't fallen completely apart yet is the lack of a system wide shock but we are overdue for one and when it happens, the whole house of cards falls.
In interwar Germany, as the Weimar Republic rolled around in degeneracy like a pig in shit, two competing forces were vying to replace it. Neither wanted to control the Weimar Republic, they wanted to remake it into something else.
Everyone knows about the one side. 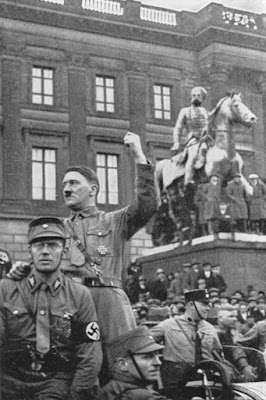 The desperation of the German people after World War I and seeing their beloved Fatherland sinking into public degeneracy made many Germans willing to try something, anything, different that would restore Germany to her rightful place as a world power. The Weimar Republic was a giant power vacuum. Into that vacuum strode a man who would become the most famous figure of the 20th century.
Hitler's Nationalsozialistische Deutsche Arbeiterpartei, or  National Socialist German Worker's Party, more commonly known as the Nazi Party, promised a restoration of Germany's former glory through a focus on workers and families and German pride. His vision was both past and future focused, recalling the many years of German power and promising a future with a thousand year Reich.
We all know, or at least think we know, how that went and how it ended. What most people don't know is that Hitler and the Nazi party were not working in opposition to just the existing government of the Weimar Republic.
In 1918 Germany was roiled by the November Revolution. This came shortly on the heels of the Russian revolution that saw the transformation of Russia into the USSR under Communism. Something similar was happening in Germany with the rise of the Spartacus League and the subsequent Communist Party Of Germany. Their intent was to replicate the Russian revolution in Germany, transforming her into a Western European version of the Soviet state. Had they succeeded, who knows how history would have played out but you can bet it would have been bad. The combined German and Russian forces would have been unbeatable and likely all of Europe would have fallen, and much of Asia, Africa and the Middle East. Imagine the Soviet Union but stretching from the Pacific to the Atlantic, from Scandinavia to South Africa. It would have been a very different world indeed. In Germany at this time there was open conflict between the Communists and the Nazi "brownshirts" in the streets.
We still see some of the vestiges of this conflict today. The modern far Left paramilitary group loosely organized under the umbrella of "antifa", which is supposedly short for "anti-fascist", uses the language and iconography of the militant wing of the German Communist Party of that era which called itself Antifaschistische Aktion. Photos from that era show the "antifa" flag flying side by side with the Communist hammer and sickle. 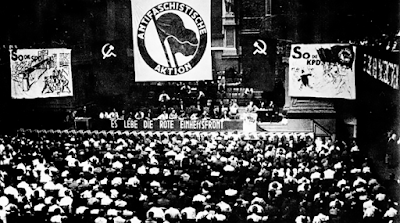 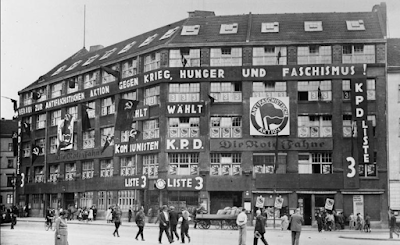 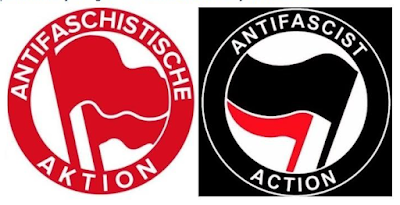 I am not sure how many garden variety idiots with antifa slogans on social media understand this but the people who organized antifa and chose that symbol? They understand.
Back to my point. I am not looking to lionize the Sturmabteilung in this post nor of course Antifaschistische Aktion. My point is that these two groups looked past the current system and sought to replace that system with a brand new system, at some level both groups understanding that the system was doomed and irredeemable. It wasn't reform they were after, it was revolution.
We find ourselves in a similar era. Despite the obvious differences, the similarities cannot be ignored. People are frightened of what the future holds. Gone is any sense of sunny American optimism, replaced with dread of more economic insecurity, violence in the cities and the apparently now permanent state of panic over the plandemic. Most Americans don't trust the election system, and increasingly the political divide has morphed into a visceral hatred of "The Other". The language of violence is already rampant and getting steadily worse from the Left. A few weeks ago a person named Steve Cox running as an independent for Congress from California wrote that people who choose not to get the "vaccine" should be shot.

The original tweet is gone but his account with over 16,000 followers is still active. Or this person:
Oregon Legislator Tells Constituents ‘We Will Force Vaccines’ To Work, Eat, Learn, Then Claims It’s A ‘Typo’ 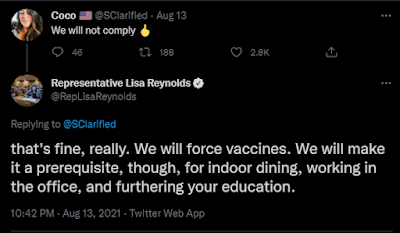 Oh, forcible participation in medical experiments. Where have I heard that before? 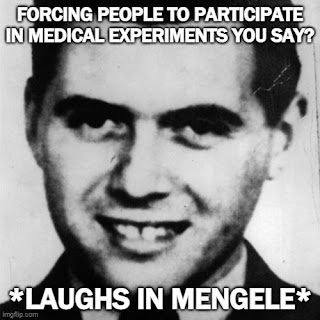 The entire society is teetering on the edge of widespread economic and social collapse and almost no one is still dumb enough to look to the governing authorities or any other institution for help. What exists today is dead and the only question that remains is what will replace the dead system? This requires a very different way of thinking:
We are not fighting for the right now, we are fighting for the future.
Who wants to win a fight to take over a dead and decaying system? The winners of this conflict will get to set the course for what remains of Western society, for good or ill, for the foreseeable future.
What happened in the past isn't that critical right now and what is happening right now isn't terribly important either. You can't change the past and everyone reading this blog has basically no control over what is going on right now. The crap in Afghanistan is outrageous but what are you going to do about it? Send a strongly worded letter to your Congressman? Strap on your $3000 AR set up and jump into Afghanistan? Yeah right.
But what you can have a real impact on is the future.
It might not seem like it but you really can, certainly far more so than your ability to change the course of the present. Recall that Hitler tried to stage a coup early on, the "Beer Hall Putsch" and ended up in jail, where he penned Mein Kampf. It was a struggle for basically a no one to go from lowly enlisted man to jailed dissident to the leader of the Third Reich. It is obvious but it needs to be said that I again am not advocating for a new Hitler but simply am pointing out the historical parallels and how understanding history can change the course of the future.
Current events are important of course and those who fail to learn the lessons of history are doomed to repeat them but our focus should be on shaping what is to come, rather than seizing the reins of power in the right-now. As the saying goes, we aren't going to vote our way out of this but grassroots organizing and creating both a physical and intellectual foundation to control the course of the future absolutely is feasible.
Being a dissident in 2021 means understanding that the present war is already lost but the war for the future is just beginning.
Posted by Arthur Sido at 8:56 AM