While the news focuses on Andrew Cuomo getting "Me Too'd" and the return of lockdowns and mask mandates, the clock is quietly ticking down on two significant proposed regulations. The first has to do with the definition of a "frame" or "receiver" and the other deals with stabilizing braces on pistols, mostly AR/AK pattern firearms.
The goal of these two regulations is clear: making it difficult to buy and/or illegal to own popular firearms in common use.
The first regulation is aimed at making it harder for civilians to essentially make their own firearms by broadly expanding the definition of a receiver, the part of a firearm that currently is serialized. Most of you know this but right now the only part of an AR-15 that has a serial number is the stripped lower receiver, which looks like this: 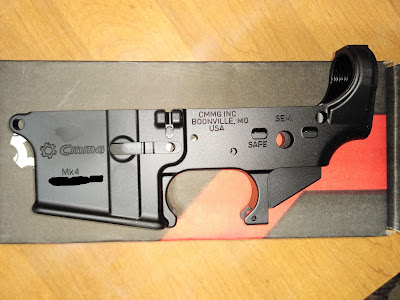 I call these AR embryos. What you see in the picture, a forged chunk of 7075 T6 Aluminum, is considered to be a "firearm" because the ATF had to make some part of an AR be the firearm and the lower receiver is sort of the core of the rifle. Everything else on an AR is not considered to be a firearm and you can buy them directly and have them shipped to your home. For example, this just came from Rock River Arms, a complete upper receiver (note, if an upper group doesn't include the BCG/charging handle, it is NOT a complete upper) with an upper receiver, barrel, charging handle, bolt carrier group, muzzle device, handguard, etc. There are no serial numbers anywhere on these parts and you can buy this without going through an FFL (if you don't mind waiting, I ordered this upper on January 8th)

The ATF is proposing changing the rules which would then require you to get a background check for, it sounds like at a minimum, both the lower receiver and the upper receiver. Their goal is to make a lot more parts into "firearms" even though none of the component parts of an AR-15 are actually capable of firing a round by themselves, thus making it far more cumbersome and expensive to assemble your own firearms.
The other piece of this regulation has to do with "ghost guns", or firearms that have been completed by a private individual and never been serialized. Most commonly this is the result of someone buying an "80% receiver" and completing the milling process or someone making a 3D printed receiver. These scare normielibs to death and most of them assume that people are being slaughtered left and right with "ghost guns". That is not the case, I don't have any hard evidence but I would bet that the tiniest of fractions of shootings are committed with "ghost guns". Even with jigs and step-by-step instructions it isn't that easy to finish an 80% receiver or print out a 3D receiver and, let's be honest, the people responsible for most shootings in this country are not known for their technological prowess.
So what is the point? To the ATF and the Feds in general, every firearm they don't have a good trace on is dangerous. Whether a "ghost gun" or a firearm purchased long enough ago that the 4473 has been destroyed or a firearm obtained via a private transaction, there are millions of firearms without a paper trail to identify the owner. That drives them crazy and this proposed regulation is just another step toward making it harder to own a firearm that can't be tied to you. Speaking of which....
The second proposed regulation that is on the clock is a Byzantine system of scoring pistols to determine if they are in fact short-barreled rifles. AR and AK pistols are owned by millions of Americans and most have some sort of stabilizing brace. Sure we all know that virtually no one uses the stabilizing brace to strap the AR pistol to their arm and we all shoulder them but for now it is legal to buy an AR with a 7.5"-12.5" barrel and a stabilizing brace. If this proposed rule goes into effect, it will essentially outlaw millions of firearms that were legally purchased. This is the score sheet which looks a lot like a Dungeons & Dragons character sheet from the 80s, you can click to enlarge if you want to see the details. 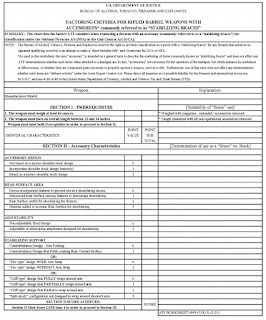 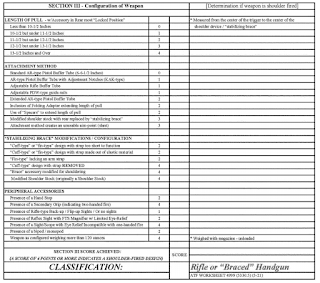 To make it worse, the classifications are so vague that it isn't a stretch to say that almost any braced pistol can be an SBR or a braced handgun depending on how you interpret the question. This would make almost any AR pistol an NFA item. For example, two very common features on an AR pistol are adjustable/telescoping braces like an SB Tactical SBA3 (2 points) and a hand-stop (to keep your hand from sliding over the end of the barrel, also 2 points). According to the good folks at the ATF 2+2=4 and 4 makes your AR pistol magically into a short-barreled rifle. No idea if they will grandfather in the millions of existing braced pistols, or make you register them or what but most people I know won't register an existing firearm.
When they tried this stunt last year they were inundated with comments and "backed down". I said at the time ( A Brief Respite On Pistol Braces ) and maintain that it was just a trial run last year...
They ATF quit on this awfully easily. That makes me suspect the whole thing was a trial run and that once Biden is in office, he will issue an executive order of some sort and armed with that order the ATF will go back and try this same scheme over but for real this time.
So here we are in August and the clock has almost run out. The comment period on the receiver/"ghost gun" regulation ends on August 19th, just a couple of weeks from today. The pistol brace comment period runs until September 8th, or just over a month away. No sign on either one that they are backing down and they are being pretty quiet about it so I expect both will become "law" more or less intact.
That means for you that it is possible that in the very near future you won't be able to buy common firearm parts unless they are serialized and that you also won't be able to buy most common AR/AK pistols unless you go through the NFA process.
What have I been saying for a long time? Your window is closing fast on some of these items. AR pistols are fun to shoot and they also give you a lot of firepower in a smaller package that is easier to carry than a full sized rifle. They are going to make it difficult to buy and/or illegal to own these very soon. Right now they are easy to come by and they are back to reasonable prices but that will not last for much longer. You know what to do and you can't say you haven't been warned.
Posted by Arthur Sido at 3:03 PM