The Brave Sir Robin Of The Capitol Police 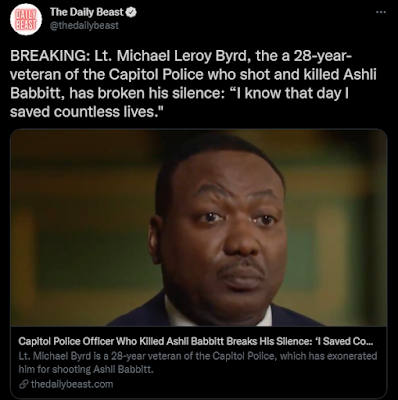 He saved "countless lives". Saved how exactly?
Ashli Babbitt was a 5'2" unarmed woman. Who was she going to kill?
All but a handful of the protestors were also unarmed. Who were they going to kill?
Since they had the run of the place for several hours and yet the only person killed was an unarmed woman, murdered by Michael Leroy Byrd, it makes absolutely no sense to claim that he "saved countless lives" when no one was in danger in the first place. Yes there were some physical altercations, quite possibly instigated by paid FBI provocateurs, but that was pretty minor. The cop who died, his death blamed on Trump by the Leftist media, turned out to have died of natural causes.
Byrd declares that he "showed the utmost courage"...by shooting an unarmed, defenseless woman to death. She was not a large adult man hopped up on drugs and resisting arrest. She was not pointing a gun or a knife or even a pair of tweezers at Lt. Byrd or any member of Congress. She was just a woman who made a poor decision to enter the Capitol building in the sight of a man who had previously been shown to be careless with his firearm, leaving his Glock in a men's room (no repercussions) and was also seen on the floor of the House in close proximity to his fellow officers with his finger wrapped around the trigger of his sidearm.
Tucker Carlson interviewed the widower of Ashli Babbitt, Aaron Babbitt, and their family attorney, Terrell Roberts, about her assassin's interview. Her husband shows more restraint than I could have mustered.
Link to the same video mirrored on my Rumble channel in case Youtube nukes this one.
The American media is treating Michael Leroy Byrd as a hero for gunning down a small, unarmed, non-threatening woman because of two reasons:
One, she supported Trump and therefore was a enemy of the state fit only to be disposed of.
Two, she was White and her killer black.
That is it. There is no reasonable person who could say with a straight face that she was a threat, and that a 28 year veteran of the Capitol Police somehow realistically saw her as a danger to anyone in the Congress. No one coming through those doors was a threat, and you know this because no one in Congress or anywhere else was killed or seriously harmed apart from one woman slaughtered by a trigger happy imbecile. If that crowd had wanted to harm members of Congress, they could have quite easily. They didn't and they never did.
The Left loves this guy because he killed a Trump supporter and make no mistake, they would be orgasmic to see anyone who voted for Trump shot dead by some government flunky with a gun. They want you dead because they see you as less than human, as undeserving of life when compared to some extraordinarily useful person like George Floyd or some random Afghan who now gets to live in America.
They hate you with a white hot hatred and that sort of hatred only has one reasonable response. 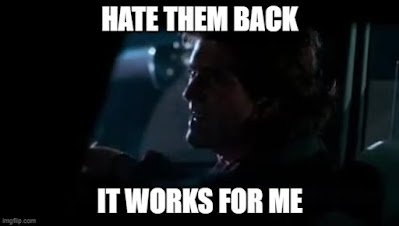 Don't expect justice and don't expect mercy. You will get neither.
Posted by Arthur Sido at 12:41 PM