Preferring to keep his head on his shoulders instead of a spike, Brave Sir Robin President Ashraf Ghani ran away. 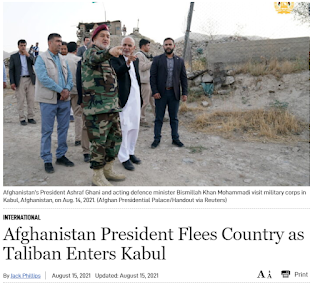 With that this fiasco is about over, the only question is whether our troops have to fight street to street to keep the diplomats safe. Genius planning all around folks. High fives for everyone.
A few weeks short of the 20th anniversary and things are right back as they were in Afghanistan only with the added bonus of the Taliban now being able to brag about defeating the U.S. and getting a ton of looted gear. At least they won't be able to maintenance those Humvees and MRAPs for long.
Game over man. Game over.
Posted by Arthur Sido at 11:07 AM