Whoever you talk to about the Afghanistan debacle, one question always comes up: why would they do that? I was talking about it with some Amish last night and they couldn't understand leaving billions in perfectly usable gear behind for the people we have been fighting for 20 years to use. The obvious answer is just sheer incompetence and stupidity, and that is a safe fallback position a lot of the time but the safe answer is rarely the complete answer. The better answer is that this was done out of malice.
That brings us to Big Country and his post They ARE Trying to Provoke -Something-. The gist of the post is that a Marine general who looks a lot like a penis dressed up in a uniform, one Brigadier General Farrell J. Sullivan, forced his troops to clean up a base that the Taliban were about to take over. That seems a lot like a retreating Wehrmacht general telling his troops to tidy up Berlin before the Red Army arrived.
BCE is of the opinion that the brass is trying to provoke some sort of response from the pissed off grunts. My take in a comment was that it could be a part of the move to create the image of widespread "White supremacism" running rampant in the ranks, as if that would be a bad thing given that the most lethal fighting force we ever unleashed back in Europe in the 1940s was full of men who top to bottom would be considered "White supremacist's" by today's standards. Push some PFC into popping a star and of course his social media would be littered with MAGA and III% stuff, and then use that as a further excuse to purge the ranks of regular White guys. Replacing Nebraska farm boys who grew up hunting with scrawny fags and obese trannies won't be bad for morale or preparedness. 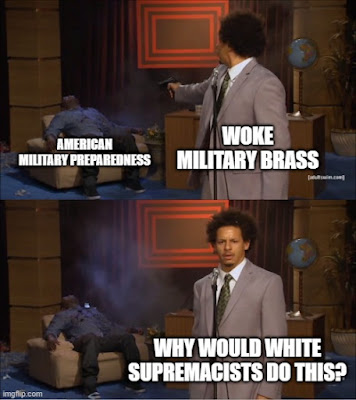 The same thing is happening all over, they keep squeezing and squeezing, hoping to get someone to crack and give them the false flag they are hoping for. Be aware of what is going on, go ahead and get pissed but don't do anything stupid in reaction because that is exactly what they want. You aren't going to do anyone any good on a slab killed by a SWAT team or rotting in jail.
Sooner or later, probably very soon, they are going to get the false flag they are looking for, either because they get someone to snap or one of their mind-fucked windup toys finally goes berserk. The wheels are coming off and they need a patsy to take the fall. Don't be that guy.
Posted by Arthur Sido at 8:49 AM