Somebody Done Effed Up

The view from Kabul... 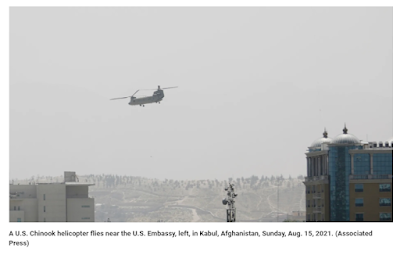 Choppers and a panicked evacuation of the U.S. embassy. Where have we seen this before? Oh yeah... 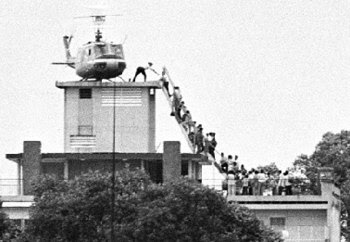 Let's be clear. There was no way to extricate ourselves from this mess in Afghanistan that wasn't going to lead to the Taliban retaking the country in short order after we left. Fear of just this scenario is partly what kept us there far longer than we should have been, although of course we never should have been there in the first place.
Also, I am not a military strategist, not even an amateur one.
Having said that, what the hell? We pull out our remaining forces abruptly and for some reason thought that the Afghan forces would hold back the Taliban indefinitely? It seems that it would have been prudent to empty out the embassy as soon as the last of the troops left. Now we are left with a panicked re-deployment of troops to protect the embassy evac.
What was the plan again? Or was the plan to pull out and then use the collapse as a pretext to go back in? WTF?
The end of the Afghanistan occupation is right in line with the entire mess, a giant clusterfrack with no plan. I have to assume that the U.S. forces "training" the Afghans knew that they were useless and would drop their U.S. funded firearms and flee at the first sign of the Taliban. I also assume they passed this up their chain of command but apparently it didn't make it to the decision makers.
News reports are that the 'ban are in the outskirts of Kabul but maybe the "government" will do the smart thing and negotiate a surrender. Otherwise "President" Ashraf Ghani is going to end up hanging from a lamppost. Do they have lampposts in Kabul? If not I am sure those inventive Taliban will find somewhere to string him up. On the other hand, why would they agree to a peaceful surrender when they are going to win anyway? According to reports which are highly suspect in my eyes: "The US embassy in Kabul said it has received reports that Taliban members were executing surrendering Afghan troops".

I am sure that being accused of war crimes is a huge deterrent for the Taliban🙄. Meanwhile...
The Taliban has also denied allegations that its militants have demanded conquered territories provide them with females aged 15 and older as brides.
Want to bet they aren't checking birth certificates to make sure those girls are really at least 15? To the winner go the spoils I guess, 20 years in the mountains humping goats leaves a jihadi with certain urges.
Again, it was always going to end this way but even still the clueless mismanagement of the withdrawal is yet another embarrassment. The inability of the military hierarchy to plan something as obvious as this should serve as a warning before we decide to get engaged in another war, this time with someone who can go toe to toe with us.
Posted by Arthur Sido at 7:56 AM