One of the recurring themes here at Dissident Thoughts is the fact that in my late 40s the United States has been at war or involved in significant conflict for basically my entire life. Born well after the end of the Second World War, none of these wars involved the acquisition of new territory. Most of them ended in some sort of failure or stalemate. We supposedly won the Cold War but the collapse of Communism in the Soviet bloc was inevitable, having failed to adapt like the Chinese have so far successfully done. Sure we killed a ton of Iraqis in both Gulf Wars but in doing so destabilized the nation and region leading to widespread human suffering. Perhaps that was a "success" in the eyes of those who pull the levers of our foreign policy behind the scenes. 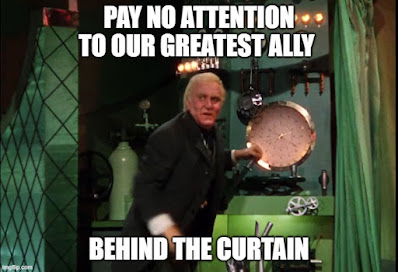 The latest muddled mess in Afghanistan is really the epitome of the U.S. military since the end of World War II: mostly valiant fighting from our servicemen on battlefields around the world that ends up being in vain thanks to incompetence and/or malevolence on the part of the political class and the guys back home with stars on their shoulders.
Something else that has drawn some attention in the aftermath of the disastrous withdrawal from Afghanistan during the postmortem is that the people who The Usurper Joe Biden's regime call terrorists took a beating in Afghanistan fighting against actual terrorists. From Steve Sailer....
Whites Made Up 85% of US Soldiers Who Died in Afghanistan 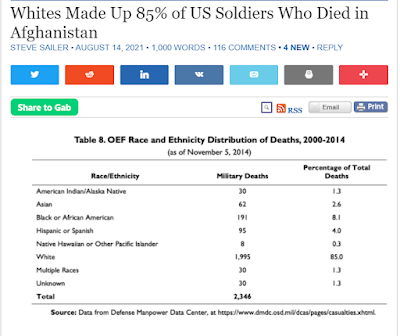 Remember that America as a nation hasn't been 85% White for half a century and today Whites are barely a majority but they were the vast majority killed in action.
This jives with what Big Country Expat said here DotMil Promotions and the Marines, specifically that blacks especially made up a very small percentage of the infantry and were more concentrated in the logistics groups in the rear with the gear.
Go back a little further.
Vietnam saw around 58,000 U.S. casualties with the lion's share of course being suffered by White men to the tune of approximately 50,000 young Whites.
In Korea there were 35,000 U.S. casualties, again mostly White young men.
World War II was an abattoir. 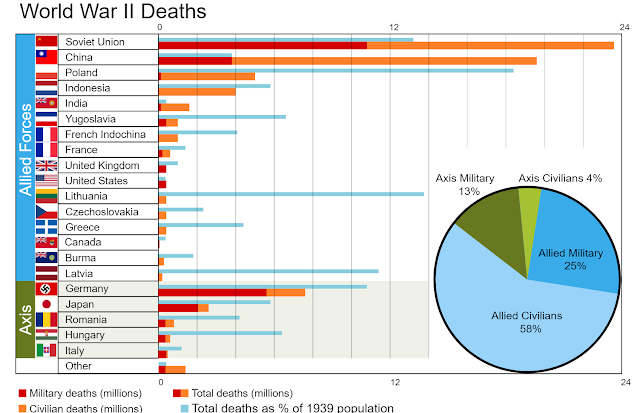 Tens of millions of people and the lion's share were Whites, Germans and Slavs. World War I wasn't quite as bad because it was more geographically limited and Europeans weren't as advanced at killing each other at that point but the death toll was still upwards of 40 million, mostly White people, dead.
In the span of 30 years, the German people lost at least 8 million young men. Russia lost over 12 million. France and England several million more.
If one were to put on the tinfoil hat for a moment, it might start to seem like European nations have been manipulated into going to war with each other for the last century as a means of gutting the more masculine and fit White men from the population. The guys who were 4-F and didn't serve because of asthma or scoliosis or whatever? They stayed home and eventually had families. That tough White kid from the mountains of West Virginia? He got to go to Europe and get shot by a different tough White kid.
Have we been manipulated by patriotism to commit a form of self-genocide, killing off our fittest young men? The average German in the Wehrmacht didn't join up so the Reich could kill off the Jews, he was defending the Fatherland. The American boys who volunteered in WWI and II thought they were defending freedom. The Russians who were conscripted fight the Germans at least believed they were protecting Mother Russia.
Every year of my life, at least some White American young men have been prematurely killed in wars that were none of our business. Over 2000 in Afghanistan over the course of 20 years, and another 3000 in Iraq. The first Gulf War, the Balkans, Somalia, little unknown conflicts all over the damn world.
These wars have combined to chew up and spit out millions of White men, millions killed outright, millions more maimed and who knows how many millions of White men are permanently damaged mentally and emotionally. All in unnecessary wars.
Really makes you think....
Posted by Arthur Sido at 9:25 AM