Our Egos Are Our Worst Enemy

What I call /ourside/ has had many iterations through the years but generally has been marked by being outside of the approved Overton window of acceptable political thought. From groups like the anti-Communist John Birch Society to the paleoconservatives all the way to modern iterations like the generally cartoonish alt-right to what I loosely lump together as the “Dissident Right”, there have been many names and many faces to this loose confederation of people who dissent from the fake Left-Right dichotomy.

One of the things that is pretty significant about /ourside/ is that we have never really had tangible power. The closest we ever came was the insurgent campaigns of Pat Buchanan in the 1990s when he received millions of primary votes. As an aside, there are some interesting parallels between Pat in the 1990s and Bernie Sanders in the last two elections, both facing unpopular front-runners and both getting screwed by their party. Apart from that we have been in the political wilderness and pretty much at every stage the gatekeepers who kept out dissenting voices were The Usual Suspects™ (see upcoming post).
The benefit of being outcasts politically is we can discuss topics that are verboten in the approved discourse. So we talk about group difference in IQ between different racial groups. We talk about the JQ. We challenge the status quo when it comes to unfettered “capitalism” and the wisdom of the universal franchise democracy. We point out impolite facts like 13/52. How well we discuss them is up for debate but at least we have the conversations and that makes us interesting. Look at the “fierce debates” between Republicans and Democrats, in general they are simply screaming about what amounts to cosmetic differences they are slapping on the latest enormous expansion of government.
This intellectual freedom both attracts and encourages people who are above average in intelligence, or at least are more open-minded. The stereotype of the goofy redneck racist with White power tattoos and a Confederate flag are carefully crafted but generally are not reflective of most people on /ourside/. Not that there are not some like that but even the guys with the stars and bars flag are often a lot smarter than they are assumed to be.
That leads to some problems. One, a lot of our guys are a little too intellectual and spend their time on ever more esoteric questions that no one really understands and absolutely no one cares about.
The bigger problem is that smart people are often hostile to other smart people. People of average intelligence are of little interest to me but other smart people always make me compare myself to them to see who is smarter. This plays out a lot on /ourside/.
The amount of virtual ink spilled by guys who are basically on the same side fighting with each other is enormous. There is no one who is in perfect agreement on everything with anyone else. That is just human nature. No one likes to be told they are wrong or that someone disagrees with them and for smart people that is especially true because it manifests as a personal attack. Smart people see their intelligence, and therefore their opinions and ideas, as their defining characteristic. Disagreeing with me is tantamount to attacking me as a human being at the very core of who I am and those attacks are met with frothing at the (virtual) mouth rage. I have often remarked that /ourside/ seems to be more energic and engaged when attacking each other than when taking on the people orchestrating our replacement and genocide.
So please, as best you can, please check your ego at the door. Every disagreement with any point doesn’t have to be responded to with a vulgar tirade. Heck, we might even try polite and constructive replies based in fact rather than emotion. Or just let it go and focus on the real enemy. I am sure our ranks are riddled with hidden leftists who stir up trouble on social media to confuse and distract us. Don’t let them. While I don’t agree with anyone 100%, most of /ourgys/ I agree with 90-99% and in a fight for our very survival, that is more than enough.
We have enough enemies without creating more within our already thin ranks. 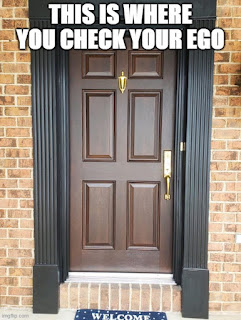