It Needs To Be Said

As the news cycle is once again dominated by Afghanistan and the utterly incompetent withdrawal of American forces followed by the fiasco of thousands of Americans as well as "Afghan allies" left behind trying to get into the airport in Kabul to take the magic iron bird to America, today brought the news that was really inevitable: more American causalities, the most in a single day in Afghanistan for many years. The responses from many neocons are what you would expect, bluster and calls for escalation and vengeance just days after it looked like we finally were going to extricate our forces from the graveyard of empires.
My take is quite different, probably very cold-hearted and even, dare I say, "un-American".
The American people have a pretty hard and fast rule: we don't leave our people behind.
This has been the source of the POW/MIA flags seen at the homes of many Americans who still, decades after the end of the Vietnam War, hold out hope for our troops who were left behind in 'Nam. It also spawned many movies about the subject, including one of my favorites as a kid: Uncommon Valor. 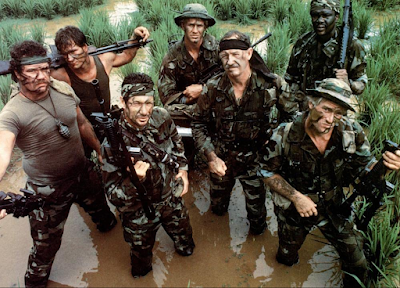 So of course the thought of Americans being trapped in Afghanistan sparks the desire on the part of those sitting at home to get them out. No matter what.
I am not sure that is wise or proper, at least in this case.
To be clear, I have no idea what all of these thousands of Americans are still doing in Afghanistan in the first place. Of course, and this is important, I wonder how many of these "Americans" are actually Afghans who have somehow managed to get dual-citizenship and/or American passports, in other words not Americans at all. I suspect that is a significant chunk of the "Americans" left behind. The rest, the actual born in America citizens? No idea. Contractors, civilians, missionaries?
Here is my point. The first week of July, Bagram Air Base, the largest U.S. base in Afghanistan, was handed over to the Afghan "army" and the last remaining U.S. forces rather infamously left in the middle of the night without telling the Afghan "allies". Almost immediately photos started coming in of Afghans looting the stuff our forces left behind. That should have been a glaring neon sign to GTFO.
At the same time the Taliban were taking over more and more of the country.
On August 15th the Afghan forces surrendered Bagram without so much as a whimper. Bagram is very close to Kabul, someone who has been in country can tell me how far in real time but as you can see, it is close.... 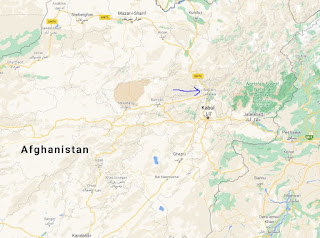 If by this point you weren't on the next plane back to America, assuming you were not critical embassy staff (and why have an embassy there?) or military, I kind of have to wonder what the hell you were thinking?
Sitting in Indiana I could see the advance of the Taliban and understand that it was inevitable that they would retake the whole country in weeks, not months. Why did people in Kabul think otherwise? I also could guess that the retaking of Kabul and the entire country by the Taliban was going to be bad news for people who didn't want to go back to sharia law or whatever the Taliban enforced.
Maybe they couldn't get out, although I assume there were lots of flights, but it seems to me that they waited until things really went to shit and then decided "Oh crap we gotta get out of here!". Now we are in a situation where our forces are trapped in an airport in what appears to my amateur eye to be a really shitty tactical situation. The deadline apparently agreed to by the Taliban and the U.S. of August 31st is quickly approaching and the situation seems to be deteriorating fast. Soldiers trapped with no room to maneuver and civilians to protect are in a bad spot.
So I have to ask: do we really want to spill more American blood to try to get people out, that may or may not be American, who chose to not leave when the Taliban were clearly taking over the country?
If someone climbs Mount Everest and then gets trapped because they don't know what the hell they are doing, is it incumbent upon professional climbers to go get them? At some point doesn't the old saying about you making your bed and now you having to lie in it come into play?
Maybe not. I get that we don't want to leave anyone behind but there needs to be some sort of cost-benefit analysis here. There must be a better solution than the chaos at the airport with American forces facing suicide bombers. This might be a bad take but I think it is a question that has to be asked and yes there are lots of other factors in play like actual Americans being left behind in favor of privileged Afghan "allies". If I am missing significant factors, please feel free to correct me.
Perhaps the way to ask it is this: how many combat casualties are too many in order to evac people who should have left weeks ago?
Posted by Arthur Sido at 10:57 PM