If you need further proof that people far smarter than the public face of the Biden regime are actually running the show, people who's names you have likely never heard, you need look no further than their carefully measured approach to gun control.
As it became apparent that Biden's handlers were going to pull of a coup, steal an election and place this doddering old fool in the Oval Office I assumed that we were in for a full on assault on the 2nd Amendment. The strategists running Biden's campaign as much as said so in the 2020 platform which I detailed here: The Future Of Gun Ownership (Or Lack Thereof)
Liberals in general and anyone associated with Joe Biden specifically are notoriously stupid so I expected a clumsy attempt to ram through some sweeping legislation, a move that would stall in the Senate and end up being a disaster. Or perhaps it would pass and that would lead to a significant showdown as the overreach caused gun owners to openly rebel.
Instead we have seen a far more measured and subtle approach. While some legislation that was DOA has been proposed by a few of the extraordinarily dumb members of Congress, most of what we have seen has been quieter and attacked on multiple fronts. The proposal to change the definition of a receiver and ban "ghost guns" almost simultaneously with the renewed move to redefine pistol braces as short barreled rifles has generated a lot of attention but there is little chance this attention on our side will stymie their efforts. The comment period for ATF proposed rule 2021R-05 ended on August 19th so I expect to see the new rules on receivers and "ghost guns" being finalized as soon as next week. The comment period for pistol braced AR/AK pistols, ATF proposed rule 2021R-08, expires in about 2 1/2 weeks and that is going to get a lot of attention. I would recommend you get a pistol AR/AK now if you want one.
Then last week, in a move that caught a lot of people off-guard, the State Department banned new import licenses for Russian made ammo and firearms. That is leading to panic buying, at 8:30 AM on Sunday prices for 7.62x39 rounds are over $.50/round and climbing. Others are following, 5.56 is over $.50 and .223 is up to $.45/round.
All of this happened without an official executive order from Biden or legislation from Congress. It also is getting little attention from the bulk of the gun owning community, at least so far.
Meanwhile as the occupation of Afghanistan winds down, the regime has been working overtime to pivot the endless war on terror away from actual Islamist terrorism and on to the phantom menace of "White supremacist domestic right-wing terrorism". It has been an amazing turnaround to see the once anti-war Left suddenly clamoring for Americans to go back to Afghanistan "for the girls" and while we are at it maybe invade a few more places. For example...

You will be stunned to discover Ms. Applebaum's ethnic heritage. This fella on Twitter gets it right.... 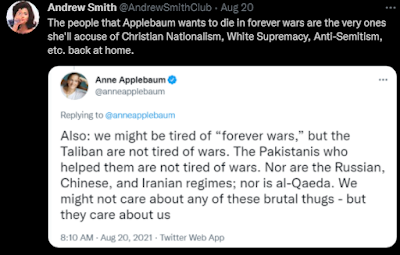 For people like Anne Applebaum there is no upper limit on the number of dead White men she will accept to bring "freedom" to black and brown girls around the world. In fact, the more dead Whites, the better.
So the stage is set. Now we just await the penultimate act and it is going to be a doozy. I expected some sort of mass shooting false flag at a school or something as the pretext but I am beginning to think I wasn't thinking big enough. Kids are passé  when it comes to false flags, but another "assault on our democracy"? That will get the juices flowing. Look how fast most Republicans turned on the January 6th panty raid insurrection. If some official D.C. people actually get killed? They will flip on gun control so fast it will make your head spin and for the Powers That Be, a mass casualty event with lots of dead court mandarins is a small price to pay to disarm the kulaks in the heartland.
They have gotten smarter and more subtle and that makes them far more dangerous. We need to get a lot smarter on our side and quickly.
Posted by Arthur Sido at 8:54 AM