Well I found myself with an hour or two to kill while an Amish teenaged girl scrubbed the inside of my van down from top to bottom so of course I figured I would grab a few firearms and get some range time in. 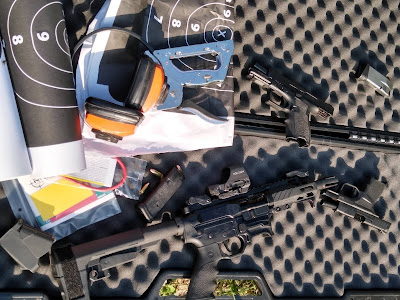 It is also, by northeast Indiana standards, hot enough to kill. Not so much just the temperature but the humidity the last few days has been brutal leading to heat indexes in the 90s. 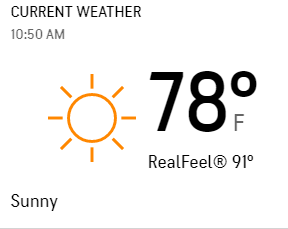 Sure if you live in a tropical swamp like Alabama, that doesn't seem that hot but when you live somewhere it snows in the winter, anything that feels like 90 degrees or hotter is brutal. Plus the humidity was making my glasses fog non-stop, which combined with the sweat getting on them made visibility not so great. Anyway, shot my PSA Dagger for the first time, pretty nice shooting gun. Could use a trigger upgrade but that is true for most OEM pistol triggers. Shot the Hellcat a bit but not a ton because micro-compact pistols just aren't pleasant to shoot a whole bunch as you get all of the recoil with very little heft to absorb it. Also got to shoot another "pistol" for the first time, the Rock River Arms 9mm AR pattern RUK-9BT. That is a ton of fun to shoot and ran like a champ with cheap reloaded 9mm. Right out of the gate with a brand new red-dot (Holosun HS510C) this was my pattern at 10 yards. It was off on elevation quite a bit so you can see where I moved it up a few clicks. Later patterns were dead on the money after a few more adjustments. 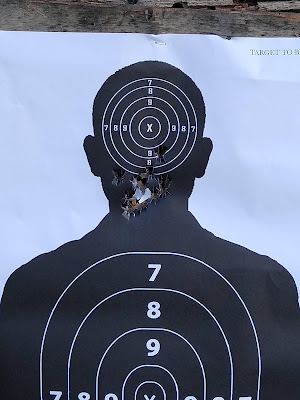 Keep in mind, I am not a great shot by any measurement. Probably an average shooter with anything but a shotgun and I hadn't shot this pistol before. So I was pretty pleased with the initial run. I am a big fan of the Holosun HS510C, it has a dual reticle, solar charger and a quick release lever so you can yank it off quickly if it malfunctions and go to iron sights. This is what you see: 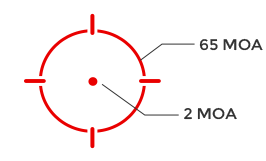 So it is really easy to acquire quickly, I like it better than a plain red-dot.
This was kind of a last second thing so I ran out of the house without any extra mags so I was using 15 rounders instead of the higher capacity mags which was kind of a pain plus with the heat I didn't shoot as long as I would have liked but still a little shooting is better than none. We all need to really be intentional about this. I am fortunate in that I have a place to shoot for free about 6 minutes away so I really don't have much in the way of excuses to not shoot more.
It needs to be an everyday thing. Not shooting necessarily but something to improve your position. Maybe sending some rounds downrange or maybe reading a book to stretch your mind, perhaps watching a video and learning a new skill, better still getting out and exercising to keep yourself in shape or get yourself there.
Everyday is an opportunity to get better or to waste it and get worse. Just about everything that will keep you alive is a perishable skill so use 'em or lose 'em. Now I need to make sure to take my own advice.
Stronger, smarter, deadlier. Every single day.
Posted by Arthur Sido at 11:16 AM