Robert E. Howard was an author in the early part of the 20th century, a friend and contemporary of H.P Lovecraft. He suffered from mental illness and took his own life in 1936 at the age of 30 but before his untimely death he left a ton of writing, most famously works featuring his character called Conan.  I recently read some collections of stories following another of his characters, Solomon Kane, a crusading Puritan. He doesn't possess much of a back story or a real motivation, he simply wanders the globe finding and then killing evil-doers.
One passage in particular grabbed my attention....
Kane stood, an unconscious statue of triumph – the ancient empires fall, the dark-skinned peoples fade and even the demons of antiquity gasp their last, but over all stands the Aryan barbarian, white-skinned, cold-eyed, dominant, the supreme fighting man of the earth, whether he be clad in wolf-hide and horned helmet, or boots and doublet – whether he bear in his hand battle-ax or rapier – whether he be called Dorian, Saxon or Englishman – whether his name be Jason, Hengist or Solomon Kane.
Howard, Robert E.. The Savage Tales of Solomon Kane (p. 320). Random House Publishing Group. Kindle Edition.
We often forget that White men have been "the supreme fighting man of the earth" for thousands of years. At one time White men conquered virtually all of the globe, subjugating people from China to India to Africa to South America. We were especially good at killing each other, combining our natural affinity for warfare with our superior intellectual capacity and creativity. Notice that basically every modern military for over a century has used the firearms made by or copied from those made by Europeans. We are just good at it. Of course we were also the very best at things like exploration and invention, the arts and civilization.
What is more important to my point is that this was how the ancestors of young White boys were portrayed in earlier ages: warriors, conquerors and explorers. There was a decided lack of shame and guilt for the prowess of White men in exploring and conquering the globe and those White boys read about heroic White characters, fictional and non, who embodied the best of masculinity and humanity in general.
Our popular culture shapes and molds the children who absorb it.
For most of our history, the stories told to children were designed to reinforce positive personal attributes: sacrifice, courage, wisdom, chivalry. As a young child and a voracious reader the stories I read celebrated adventure and bravery. The White men I read about were men I wanted to be like. This was reinforced in (most) TV shows and movies.
Young White boys today are largely soft and doughy, meek and timid. Fed a steady diet of electronic entertainment and high fructose corn syrup is bad enough but far more detrimental is the daily ration of White guilt and shame. It is not just new pop culture that is grotesque but also the retconning of literally every positive White franchise. The Critical Drinker has a number of videos about this, from his look at Alex Kurtzman (I'll save you looking his early life up, yes he is) stomping the corpse of Star Trek to the replacing of cartoon hero He-Man with a new butch dyke Teela. I am not sure if he doesn't quite get it or just isn't willing to say it but this is all intentional and aimed at undermining our culture.
Gone are the days of courageous White men who are swashbuckling adventurers. Han Solo and Indiana Jones are out, having been replaced by woke diverse strong women.
The stories we consume from books and film can create and reinforce who we are. If our stories are full of men of courage, conviction and character, then we will see them as men to emulate. But if those stories are full of men who are indecisive, weak or malicious, who wants to be like that?
If you have young children, especially young boys, make a concerted effort to obtain older books that portray their ancestors in an accurate and positive light and stay the hell away from modern books that only serve to slander the greatest explorers, conquerors and warriors the world has ever known. 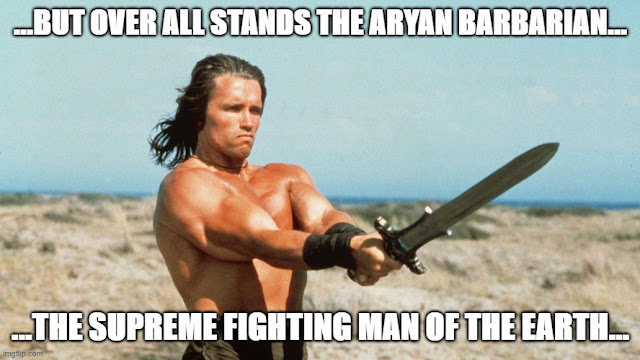