Brazilian President Jair Bolsonaro, along with Trump and Hungary’s Viktor Orbán, were on the neo-Bolshevik hit list for a number of years and it looks like he might be on the way out via a rigged election but he is telling his supporters exactly what they need to hear:

‘Everybody has to buy a rifle, damn it!’ Brazilian President Bolsonaro tells his supporters
Effing based brother.
“Everybody has to buy a rifle, damn it! Armed people will never be enslaved,” the head of state told a crowd of supporters outside his official residence, the Alvorada Palace.
He acknowledged that weapons “cost a lot,” but insisted that those who oppose guns should stop nagging people who want and can afford to buy them.
During his campaign for office, Bolsonaro vowed to relax Brazil’s gun laws so that citizens could protect themselves from the country’s rampant crime and violence.
And he kept that promise, issuing almost a dozen decrees that made firearms, including semi-automatic assault rifles, more easily available to the public. Some of them, however, were modified by the National Congress.
The president’s latest initiative in February allowed Brazilian citizens to own up to six guns and stripped back federal police and army oversight of firearms ownership. Those with hunting licenses are now free to buy 30 guns, while sports shooters can have as many as 60.
Very nice and this is the key passage:
Armed people will never be enslaved
As we see in Australia and Canada, the opposite is inevitably true:
Disarmed people are subjects, not citizens, and will always eventually be enslaved.
Remember those choices because there isn’t a third choice.
Never give up your guns. 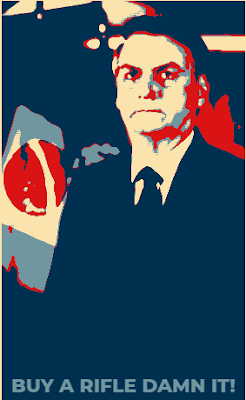