All The Wheels Just Fell Off

People worried that the Taliban might retake all of Afghanistan in six months were clearly smoking crack because it is happening right now.
Taliban insurgents take Kandahar, Herat as US plans to evacuate Americans from embassy in Kabul
The subheading tells the tale....
The insurgents have taken more than a dozen provincial capitals in recent days and now control more than two-thirds of the country
As does this graphic. 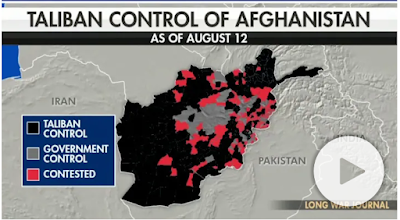 News reports last night were saying the U.S. is sending in a couple of troops to help with the evac of our embassy.
US sending 3K troops for partial Afghan embassy evacuation
Now granted I am not an expert on embassy evacuations but 3,000 troops to evacuate an embassy? One Army and two Marine infantry battalions? Leave it to the Biden regime to completely fuck up this last chapter in a 20 year national embarrassment. Just last month Biden was quoted as reading from a memo written in crayon handed to him by some flunkie that this wasn't going to happen.
President Biden last month dismissed the possibility that the Taliban would swarm through Afghanistan, which just weeks later they are in the process of doing.
"So the question now is, where do they go from here?" Biden said during a July 8 press conference. "The jury is still out.  But the likelihood there’s going to be the Taliban overrunning everything and owning the whole country is highly unlikely.
Who seriously thought that once the U.S. was no longer propping up the regime in Kabul that it wouldn't collapse almost immediately?
I assume that as the Taliban encircles Kabul you are going to see an acceleration of Afghan government troops flipping sides or just quietly slipping away and dumping their gear. Who can blame them? They have to live there, they have families and friends. No one wants to be the next guy swinging from a lamppost in Kabul.
Watch for some sort of pretext to get involved in another conflict to feed the military-industrial complex. The best case scenario would be some pissant country like Afghanistan but they are chomping at the bit to get into a tangle with one of the big boys like China or Russia. That won't be pretty given the general state of the U.S. military.
20 years of wasted lives and money all about to circle the drain and see the Taliban returning to power, only now they can rightly claim to have outlasted the omnipotent U.S. military which will only give them more hajji street cred. Good job all around!
Posted by Arthur Sido at 7:20 AM