Your Projected Retirement Date: 7 Minutes After Hell Freezes Over

Back in the day when I worked for big financial services goliaths, managing 401k plans, I would fairly regularly be called on to conduct employee meetings aimed at getting the worker bees to contribute more to their 401k. It wasn't because the company gave a shit about their retirement but a 401k plan can only have a certain ratio of contributions by regular people versus "highly compensated" staff. Basically if your peons don't put enough in their plan, the higher-ups can't max out their own contribution.
Good times. I often stayed at the Ritz Carlton, had a maximum $50 per meal budget and was driven to and from the airport by a chauffeured town car when I wasn't telling 20-something factory workers and secretaries that it was important to save in their 401k plan. Most of the time they understood the basic gist of low rate of return, low risk versus higher risk, higher potential return investments. I could show them charts of investment returns. Big number good, low number not so good.
What they didn't ever seem to get was the idea of inflation risk, the risk that your investment return will slowly be eaten away by inflation. When I was doing these meetings inflation was generally very, very low so it wasn't a huge deal for most people. I brought it up because it was part of the presentation but it never got much attention. Back in those days it was all about the eye-popping investment return in funds like the Janus 20. The riskier the tech stock, the better! Who cares about inflation when you are picking from mutual funds with 20% annual returns?
Today?
Inflation is a serious issue and on the trajectory we are headed, it is the reason why many people my age are going to find out that the retirement model we have been taught since entering the workforce is about to fail us. 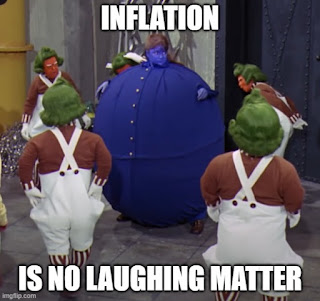